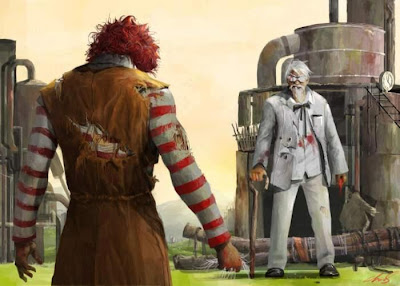 This Halloween,
the Super Bowl of Fast Food entertainment...

Join Ronald McDonald, Colonel Sanders, Wendy, BK, and Gidget (The Taco Bell Chihuahua) for instant analysis, updates and snacks during the show. You are welcomed to chat and eat along and send in your comments and/or questions.

In the meantime, here's a little pre-game gaming.... 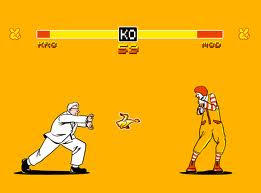 It's a once in a lifetime match between two of the most popular Fast Food wrestlers of their time. It is an epic contest and the two men involved, Ronald McDonald and Colonel Sanders, deliver a sensational performance.

McDonald and the Colonel start the only way they can, with a tie up displaying each man's strength. McDonald starts out the match with instant blow to Sanders before Sanders strikes back with a below-the-belt move. Playing to the crowd and working the angle, Sanders throws McDonald out of the ring.

Returning with full force, McDonald drops Sanders down to size before building up a head of steam and letting him have it! Playing to the crowd again, McDonald dogs Sanders then gains momentum and smacks him right back down.

The Colonel gets fired up and strikes back, showing absolutely no respect for his opponent. McDonald strikes back again with an over the knee lashing, which peeves the Colonel into knocking McDonald right back onto the mat from which he came. The ref can't keep these guys in the ring. Playing to the crowd as they have the entire match, they send the crowd into hysterics...this is what they came to see!

Using the ring steps, McDonald brutally knocks Sanders silly before throwing his sorry a** back into the ring. McDonald throws Sanders around like a wet blanket until Sanders throws McDonald aside, like a discarded hamburger wrapper.

McDonald fights back, only to take a major blow to the abdomen. Nursing what looks like a Fast Food tummy ache, he loses steam, and gets a spanking by Daddy Colonel, who pins McDonald and wins the match.

No doubt, they'll be back in the ring again... 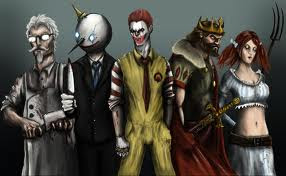