Two Ways of Seeing a Park 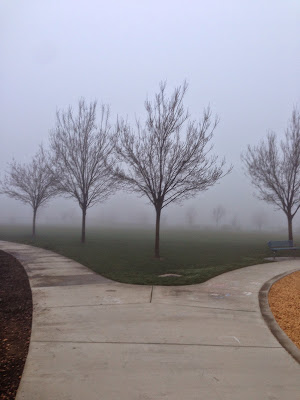 Now when I had mastered the pathways of our little park and had come to know every minuscule feature of its many bushes and trees as familiarly as I knew the the public signs posting the rules of the park, I had made a valuable acquisition. But I had lost something, too. I had lost something that could never be restored to me while I lived, except for in my memories. All the laughs, the giggles, and the grand adventures playing on the jungle gym had left my park!

I still keep in mind all the wonderful sunsets I watched while lying on the grass constructing daisy chains or pathways for the park's insects to traverse. This is when the park was new to me. A broad expanse of green grass was turned into a loudly populated playground for all of the neighborhood kids our town's new construction attracted; toward the side of the park the shine from the metal frame separating the tennis courts from their surroundings still burned my eyes; three evenly placed benches were no longer forts under which my friends and I could invisibly hide from unsuspecting grown-ups, they were now lowly benches upon which tired, overworked parents rested while their children played unsuspecting and unaware of the changes in perception that will eventually mark the end of their childhood memories, too.

New trees had been planted, but I looked upon them with solace, from the perspective of an older oak who had been there longer. These trees didn't yet know the park as I did, they had yet to discover its many nuances, its breaks in cement and its rough rocks. These kids like these trees didn't know the best path to cross the bed of rocks separating the park from the edge of the school ground and the back of the neighborhood community. Only we who played here from the time the park was built knew the best way to cross those rocks without slipping and scraping your leg or knee in the process. Whenever someone's frisbee flies out of bounds, it is only the most daring and knowledgeable who retrieve it. There were also graceful curves along the pathway, which I knew well. These curves reflected the marvels of architecture and city planning that I never before pondered as a child. Before they were cement streets upon which we drew dotted lines with outdoor chalk so that we could race our bikes.

I stood like one arrested in thought. I drank it in, in a speechless appreciative rapture. The park was new to me, and I had never seen anything like this in Paris. But as I have said, a day came when I began to cease from enjoying the park. Instead I noted its glories and many charms which the moon and the sun and the twilight wrought upon it; another day came when I ceased altogether to notice that, too. Then, if that sunset scene had been repeated, I should have looked upon it without rapture, without fond memories, and should have commented upon it, inwardly, in this fashion: "This sun means that we are going to have wind tomorrow; that overgrown bush means that the gardeners will trim it come Tuesday; that break in the cement is not from an underground colony of exoskeleton warriors breaking free into the world, but rather something the city should replace, and soon! And if they don't do so, somebody could get hurt; the signs clearly state that no dogs are allowed in this park, and look over yonder, people playing fetch with their dogs in the tennis courts; such blatant disregard for the rules that are there to maximize the entire community's enjoyment of this park; and how is anybody supposed to enjoy the park when it is so crowded and overgrown with runamuck lavender bushes?"

No, the enchantment and the thrill were all gone from the park. All the value of any feature it had for me now was the amount of usefulness it could furnish for the community at large. Since those days, I have pitied analysts from my heart. What do the marvels of technology mean to a researcher but a "critique" that ripples above the next upgrade? Are not the world's epiphanies and triumphant inventions sown thick with what are to him the signs and symbols of outdated information? Does he ever see their inventiveness at all, or doesn't he simply view ingenuity professionally, and comment upon it as a condition of fact and judgment rather than artfulness and virtuosity? And doesn't he sometimes wonder whether he has gained most or lost most by learning his trade?

Inspired by Mark Twain's 1883 Two Ways of Seeing a River, from his autobiographical Life on the Mississippi, in which he considers what may be lost as well as gained through knowledge and experience.