The Odyssey of Genius

Genius, Virtue, and Reputation, three great friends, agreed to travel over the island of Great Britain, to see whatever might be worthy of observation. But as some misfortune, said they, may happen to separate us, let us consider, before we set out, by what means we may find each other again. “Should it be my ill fate,” said Genius, “to be severed from my friends – heaven forbid! – you may find me kneeling in devotion before the tomb of Shakespeare; or rapt in some grove where Milton talked with angels; or musing in the grotto where Pope caught inspiration.”

Virtue, with a sigh, acknowledged, that her friends were not very numerous; “but were I to lose you,” she cried, “with whom I am at present so happily united, I should choose to take sanctuary in the temples of religion, in the palaces of royalty, or in the stately domes of ministers of state; but as it may be my ill fortune to be there denied admittance, inquire for some cottage where contentment has a bower, and there you will certainly find me.”

“Ah, my dear friends,” said Reputation very earnestly, “you, I perceive when missing, may possibly be recovered; but take care, I entreat you, always to keep sight of me, for if I am once lost, I am never to be retrieved.” 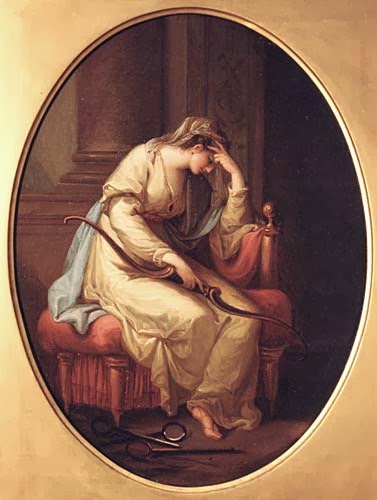 Genius expresses her devotion to productions of herself, and unlike Penelope in her letter to Ulysses –

Your Penelope sends you this, slow Ulysses (Heroides 1.1)

- maintains that devotion by kneeling before genius, by allowing herself to be enraptured in the grove where Milton communed with angels, and in her musings in the grotto where the Pope found himself in accordance with inspiration. 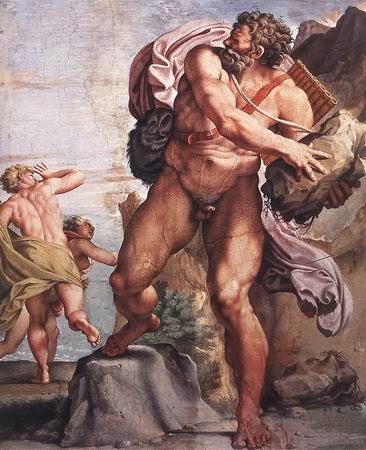 The other heroines of Aesop’s Fables play similar roles in illuminating our understanding. Virtue, sighs in acquiescence and resigns herself to taking sanctuary in the temples of religion, in the palaces of royalty, or in the stately domes of ministers of state, much like how Odysseus, after his encounter with the Cyclops, must achieve a new epic identity, an epic about his homecoming, about his own nostos  'return', but, for the moment, his confidence in his power to bring about this nostos is reduced to nothing. He has lost his confidence in the power of his own mētis 'craft' to devise a stratagem for achieving a nostos. When he reaches the island of Circe and learns that this place, though it first seems familiar and reminiscent of his own island, is in fact strange and alien and antithetical to home, he despairs (10.190-202). The wording that expresses his desperation connects the hero’s metis with his nostos:

My friends, I am speaking this way because I do not know
which place is west and which place is east
-which is the place where the sun, brining light for mortals,
goes underneath the earth
and which is the place where it rises. Still, let us start thinking it
through, as quickly as we can,
whether there is still any craft left. I must tell you, though,
I think there is none. 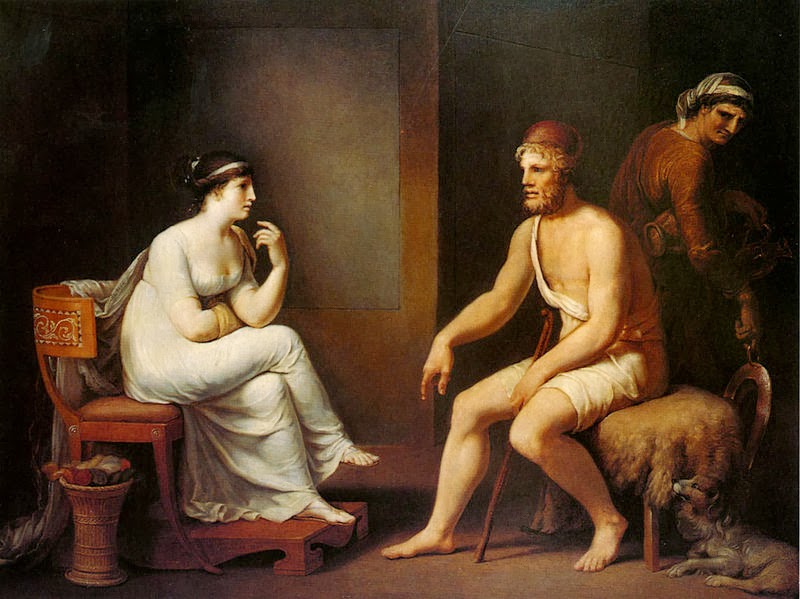 The hero feels he has no craft left in him to devise a stratagem for a successful homecoming, and like Reputation, expresses his despair and feeling of disorientation. Unlike Genius and Virtue, Reputation, like the epic hero Odysseus, must live out the master of her own heroic life, and like Odysseus must have a nostos or ‘homecoming’. For Odysseus to succeed in coming home to Ithaca, however, his nostos must be more than simply a ‘homecoming’: it must also be a ‘song about a homecoming’. The kleos or 'epic glory' of Odysseus depends on his nostos, that is, on the song about his homecoming, which is the Odyssey. By contrast, the kleos of Reputation depends not on Reputation’s nostos but on Reputation staying home.

For Odysseus to get over the Iliad, he must sail past it. For Reputation to stay in tact, she must remain home and not venture forth into the ironic and disoriented domains of Genius and Virtue. But staying home is a false Iliad, which is why, like Odysseus, Reputation must sail past the Island of the Sirens. The Sirens, as false Muses, tempt the hero by offering to sing for him an endless variety of songs about Troy (Odyssey 12.184-91). The sheer pleasure of listening to the songs of the Sirens threatens not only the homecoming of Odysseus, but the self-knowledge that may be gained by Reputation from embarking on an Odyssey into genius. 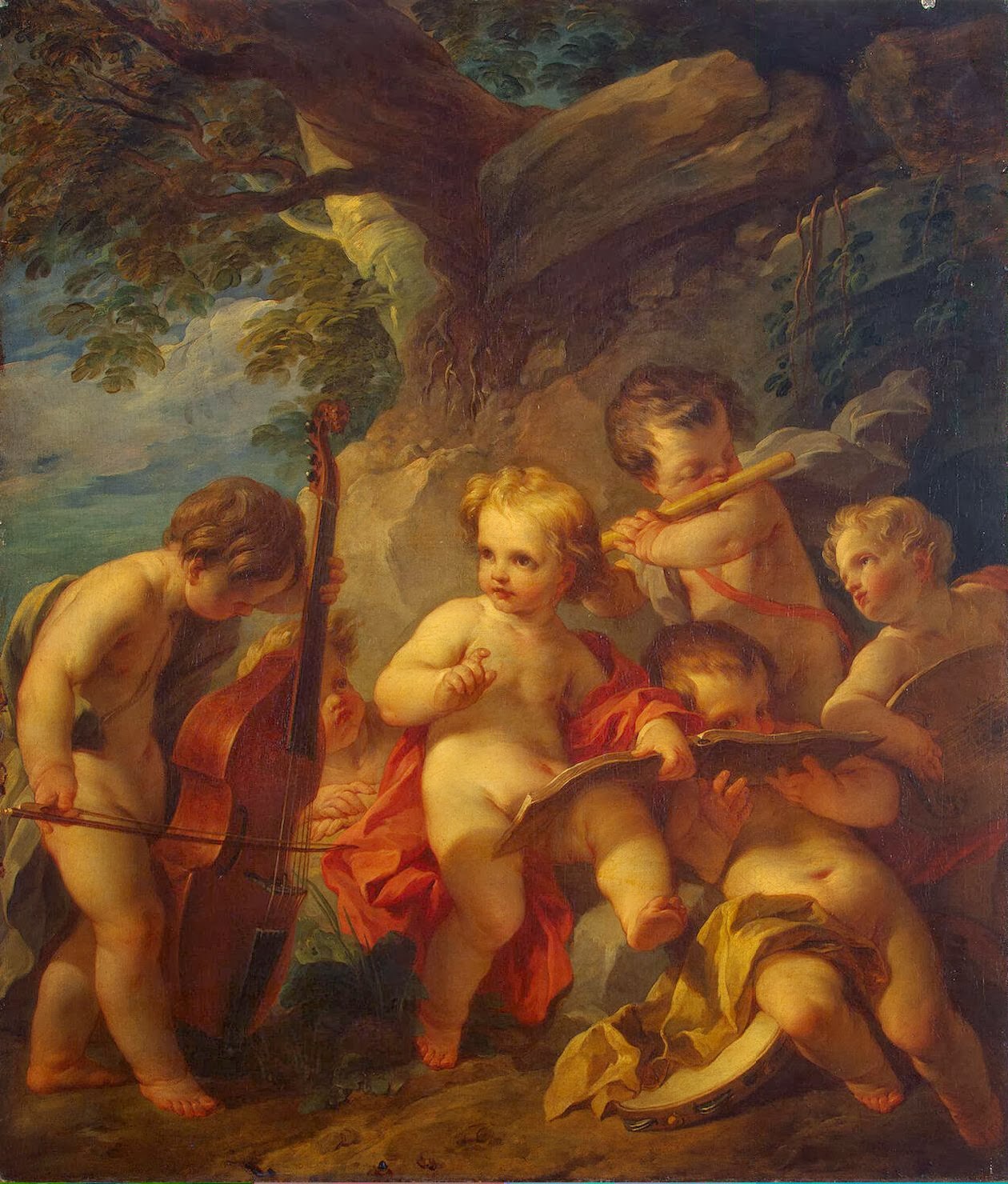 It is tempting to linger and never stop listening to the endless stories about Genius, but just as Polyphemus the Cyclops was deceived and blinded by a false name, so too does the designation Genius deceive and blind Reputation.

The noun noos means thinking in the sense of being conscious, not being unconscious: like the noun nostos, it is derived from the root *nes- in the mystical sense of returning to light and life.

Odysseus’ nostos ‘return’ connects with his noos ‘thinking’ not only in the explicit sense of thinking about saving his own life but also in the implicit sense of being conscious of returning home. This implicit sense is encoded in Aesop’s fable when Reputation expresses her belief that once she is gone, she cannot be retrieved. 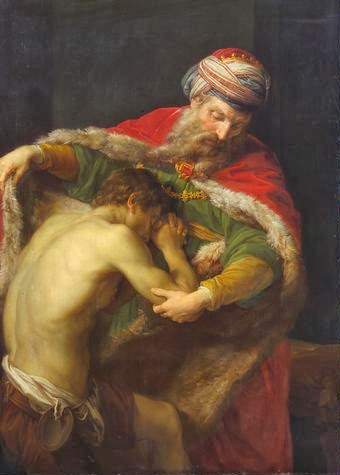 This metaphor of coming to is at work when one embarks on an Odyssey of discovery, when we venture forth from belief and return awakened from our journey. As Reputation warns, we may not retrieve that which we lose by doing so, but what we gain in return is as illuminated as the morning star that welcomes the coming of the dawn in each person’s homeland.