The Philosophy of the Force 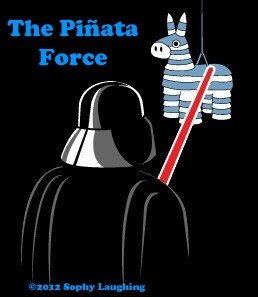 The significance of the philosophy of the force ranks higher than the study of nature in terms of aiding our understanding of reality.

Consider Jedi Idealism, the intellectual movement spanning the 28th and 29th centuries that rejected the strict empiricism of early Jedi and argued instead for the possibility of rational knowledge of absolute existence of this donkey piñata comic, aptly named: El Burro Azul or The Piñata Force.

The Jedi Idealists were not simply idealistic in the ordinary Jedi sense of the term; rather, they thought that it was possible to ascertain the ultimate nature of the piñatas' force by going beyond merely what the Jedi could sense. We do not "see", for example, laws behind the laws of the force, but we do glimpse them by the "force's eye," so to speak.

Consider how the status of knowledge in a particular century influences how Jedi "see" its development. According to Yoda, "piñatas have a systematic organic unity, they do."

The Jedi Counsel is sympathetic to the idea that The Piñata's Force contributes to genuine knowledge and understanding.

It is useful to know how Jedi think about the nature of the Burro Azul's reality, our ability to know it, and the development of the force that facilitates such understanding. The Burro Azul is not necessarily a religious deity in the strict sense; rather El Burro Azul refers to humor, broadly conceived - what we might mean when we refer to "humanity's humor."

In the Phenomenology of Burros, Jedi endeavored to provide a description of our most primitive and naïve grasp of the Burro (beginning with myth) to our most comprehensive and penetrating (philosophy).

"We pass through stages along the way - each appearing, at least for a time, to be the definitive way of knowing the Burro's force and understanding how to hit it with our lightsabers." Obi Wan Kenobi.

Since such understanding provides the basis for our moral, social, and political relations, it provides the organizational framework for whole forms of celebration - galaxy patterns, interspecies relations, family and Jedi structures, and winning podracing tournaments.

Because each of the stages along the way is incomplete, consciousness eventually encounters what we might call a breakdown of that worldforce-view. There is something that it cannot explain, that it cannot adequately take into account: its antiforce.

When this happens on a grand or fundamental scale, a Blue Donkey Piñata appears and the very underpinnings of Jedi society and knowledge are shaken. This marks the birth of a new stage of development: a burrosynthesis that preserves elements of both the old Jedi view and its counterpoint.

For Jedi, piñatas are the working out of these patterns and the transition from one overarching form of "seeing" to another. In other words, piñatas are the development of Piñata Force as it moves toward absolute knowing (and once that is achieved, at least on this theoretical level, piñatas explode).

The Piñata Force is the third stage from the end of the development of force, according to Jedi, prior to the thrill of winning one's freedom in a podracing tournament and ultimately philosophy.

In the "Introduction to Philosophy of The Piñata Force," the Jedi effectively locate the end of the force - which is to say the time when the force achieves its fullest possible expression of the Burro Azul and confronts its disappointment or failure to achieve completeness - in romantic Jedi poetry.

Stay tuned for more on how the Jedi think Padawans are both conscious and capable of designing new piñatas - that is to say, our young Padawans not only possess the product of midi-chlorians, but also have the ability to create new piñatas that reflect the very nature of the Burro's force.