Of the Things of which we May Laugh, IV 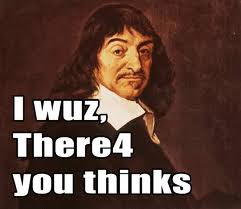 But it may be said, perhaps, that, although the senses occasionally mislead us toward thinking negative thoughts and reacting accordingly, and such responses are so far removed from us as to be beyond the reach of close observation, there are yet many other of their pathetic and miserable informations, of the truth of which it is hilariously impossible to doubt; as for example, that I am laughing and that my name is Laughing so that I might be described as laughing in a way that a humorous shift occurs whenever the subject arises. How could I deny that I possess the name Laughing, and often times laugh, and withal escape being classed with persons in a state of over-seriousness, whose brains are so distorted and clouded by seriously dark vapors as to cause them pertinaciously to assert that they are to be “taken serious” when they are quite funny. I should certainly be not less insane than they, were I to regulate my way according to examples far more interesting.
Posted by Soph Laugh at 7:03 AM