The Art of Following Your Dreams, Part 1 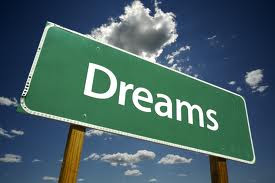 The intent of this series is to define and explain the philosophy of following your dreams. Following your dreams is self-directed discovery. The person who follows their dreams is believed to be capable of discerning where their happiness lies. It does not maintain that educational institutions, government agencies, or religious clergy are necessary to achieving and maintaining happiness, and often questions them. The operational definition of following your dreams is the process and result of exploratory experiences that equip an individual with self-knowledge and skills and prepares him or her for life. Defining dreams is the issue at the heart of alleviating an existential crisis. Most people want from life an entirely different set of experiences that traditionally defined paths provide. The person who sits down and defines a clear path to following their dreams recognizes this and puts the meaning and pursuit of achieving their dreams back into their own hands.

Traditionally, people follow paths that are either laid out before them by their parents, society, or by their interpretation of what they think is expected of them. If you ask most people whether or not they are doing that which they dream of doing, they typically respond with a resounding No! And when you ask them why, they typically respond with one of the following rationalizations:

That's unrealistic, how would I support myself?

I don't really know what I want to do, so I'm playing it safe

If I don't go to college and get a degree, what will they think?

If I don't make a lot of money, what will they think?

Who is this they of which they speak?

For some people, following one's dreams differs radically from the traditional model of looking to an educational institution or corporate structure for direction and meaning. If, perchance, it is your dream to become a medical doctor, then following a traditional educational path is par for the course as is working in a hospital or clinic.

If, however, it is your dream to become a world famous artist, why would you waste a single precious moment of your time studying unrelated subjects that do not augment your artistic knowledge and abilities? Unless you are curious about other subjects and believe this knowledge will enhance your skills and sense of knowing about the world, they might not be necessary. In fact, they might be detrimental to your success, growth, and overall happiness.

Following your dreams is not necessarily a rejection of traditional schooling or traditional employment, but rather an acceptance of where your happiness lies as well as the implications of this self-knowledge.

Following your dreams can happen by staying at home to paint, sculpt or write, it can happen while traveling the globe in a deep desire to know your world and help your fellow global citizens, or it can happen in a classroom as you sit there listening to profound thinkers introducing you to philosophical, mathematical or scientific theories that you later explore for yourself.

Whichever direction you turn, following a path that speaks to you, that makes you feel alive inside... that is the path known as following one's own dreams.