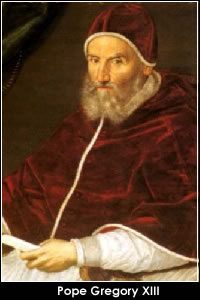 The True History of April Fool's Day...
Pope Gregory XIII issued a decree in 1582 and the date jumped from 4 October to 15 October overnight (in Catholic countries). Protestants were suspicious of this Roman slight-of-hand thinking they'd be robbed of 10 days of their lives.
Britain and America did not adopt the Gregorian calendar until the 18th century; the Russians held out, astonishingly, until 1917.
The Pope's adjustmented was needed because the Earth does not oblingingly circle the sun in an exact number of days. The old Roman calendar did not take accurate enough account of leap years, and the Easter Festival was getting warmer and warmer as the calendar year gradually slid out of synchrony with the seasons (kind of like it does today).
Pope Gregory decreed that century years should not be leap years unless divisible by 400. This rule adjust things for 3,300 years.
Recent refinements to the rule have put us right for another 44,000 years.
Rumor has it, though, that the inhabitants of an island in the Outer Hebrides still have no intention of adopting the newfangled Gregorian calendar.
Speaking about measurable time as if it were real, I myself seek enjoy paying hide and seek with the concept of a cosmological constant. I know it exists, but I don't when. 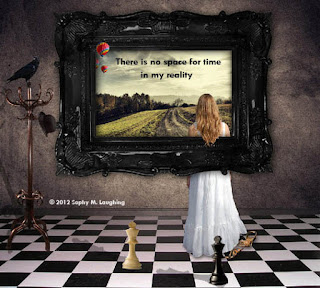 The wale of a tale Wikipedia told in lieu of the real story...

In 1564 King Charles IX of France, in his edict called l'Edit du Roussillon, gave nirth to what is referred to as the Gregorian calendar.  King Charles, the philandering scandal he was, reformed the calendar, moving the start of the year from the end of March to January 1.
However, in a time without trains, a reliable post system or the internet, news often traveled slow and the uneducated, lower class people in rural France were the last to hear of and accept the new calendar.


Those who failed to keep up with the change or who stubbornly clung to the old calendar system and continued to celebrate the New Year during the week that fell between March 25th and April 1st, had jokes played on them.


Pranksters would surreptitiously stick paper fish to their backs. The victims of this prank were thus called Poisson d’Avril, or April Fish—which, to this day, remains the French term for April Fools—and so the tradition was born. 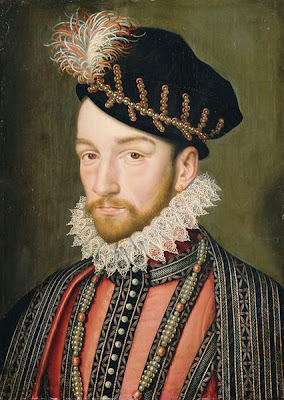