My Dinner with Occupy 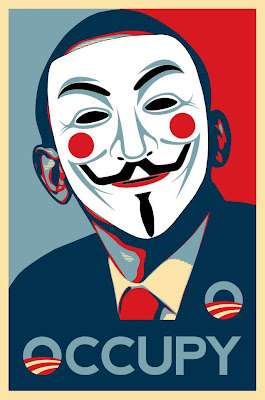 My Dinner with Occupy
[We see Occupy walking along, protesting in big city streets; we hear streat sounds. Occupy has one expression. We hear his voice commenting on the action, as a narrator would. This narrating voice will be labeled "OCCUPY'S NARRATION" to distinguish it from Occupy's actual words within the action of the story.]
OCCUPY'S NARRATION: The life of a protestor is tough. It's not easy, as some people seem to think. You work hard designing masks, and nobody puts them on!  You take up other lines of work to try to make a living... I began manufacturing protest signs...and people don't buy them! So you just spend your days doing the errands of your trade. Today I had to be up by ten in the morning to make some important phone calls. Then I'd gone to the stationery store to buy new markers. Then to Kinkos: there were dozens of things to do. By five o'clock I'd finally made it to the post office and mailed off several copies of my demand letter, meanwhile checking my iPhone constantly to see if my pro bono publico lawyer had called with any news on our negotiations. In the morning, the mailbox had just been stuffed with bills! What was I supposed to do? How was I supposed to pay them? After all I was already doing my best! I've lived in this city all my life. I grew up on the upper east side, and when I was ten years old I was rich! I was an aristocrat, riding around in taxis, surrounded by comfort, and all I thought about was art and music. Now I'm thirty-six, and all I think about is money. [Change of scene: in the subway. A train pulls in; Occupy gets in and we see him riding, standing against the door.]  It was now seven o'clock and I would have liked nothing better than to go home and have my girlfriend Debby cook me a nice delicious dinner. But for the last several years our financial circumstances have forced Debby to work three nights a week as a waitress. After all, somebody had to bring in a little money! So I was on my own. But the worse thing of all was that I had been trapped by an odd series of circumstances into agreeing to have dinner with a woman I'd been avoiding literally for years. Her name was Sophy Laughing. At one time she'd been a very close friend of mine, as well as my most valued protestor in Spain. In fact, she was the woman who had first discovered me, and put one of my masks on her assembly line. When I had known Sophy, she'd been at the height of her career in espionage. The amazing work she did with various groups and organizations, the $62 Billion Bank Bailout Plan in Mexico had stunned analysts throughout the world! [Change of scene: Occupy is again walking.] But then something had happened to Sophy. She'd dropped out of the political scene. She'd sort of disappeared! For months at a time her friends and family seemed only to know that she was traveling in some odd place, like Tibet, which was really weird, because she loved her friends and family. She never used to like to leave home at all! Or else you'd hear that someone had met her at a party and she'd been telling people that she'd taken up humor studies, or something like that? Obviously something terrible had happened to Sophy. [Occupy is now approaching the entrance to the restaurant. We hear piano music, the easy kind that is played as background music. Occupy puts on a tie.] The whole idea of meeting her made me very nervous. I mean, I really wasn't up for that sort of thing. I had problems of my own! I mean, I couldn't help Sophy! Was I supposed to be a doctor, or what?! [He walks in and checks his coat.]
to be continued...
Posted by Soph Laugh at 7:35 AM