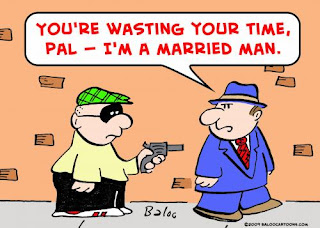 Two guys are walking down the street when a mugger approaches them and demands their money. They both grudgingly pull out their wallets and begin taking out their case. Just then, one guy turns to the other and hands him a bill. "Here's that $20 I owe you." 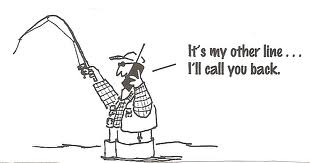 Two friends decide to take an expensive fishing trip to Montana but after a week of fishing they only manage to catch one fish. On the way home one friend says to the other, "The way I figure it, that fish cost us $5,000."   "Yeah," his friend replies, "Good thing we didn't catch more." 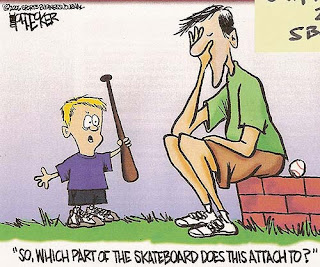 The manager of a baseball team went to his doctor to get an ulcer treated. "Remember" the doctor warned him, "Don't get excited, don't get angry, and forget all about baseball when you're off the field. Try to remember it's just a game."   "Thanks, Doc, I'll follow your advice."  "Good. I'll see you in a moth to find out how you're doing." As the patient heads out the door, the doctor says, "Oh, one more thing: why did you let the pitcher bat for himself last night when you had men on first and third?" 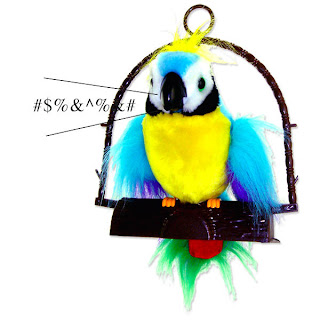 Bob received a parrot for his birthday. The parrot was fully grown, with a bad attitude and worse vocabulary. Every other word was an expletive, and the parrot was constantly cursing and swearing. Bob tried to change the bird's attitude by setting a good example, but the bird continued to swear as much as ever. This went on for several months until finally, in a moment of desperation, Bob put the parrot in the freezer. For a few minutes he heard the bird squawking and cursing - and then, suddenly, it went quiet. Bob was afraid he had actually harmed the parrot and he quickly opened the freezer door. The parrot stepped out onto Bob's extended arm and said, "I'm sorry that I have offended you with my language and actions and I ask for your forgiveness. I will endeavor to correct my behavior."  Bob was astonished at the bird's change in attitude and was about to ask what had caused such a drastic change when the parrot said: "Sir, may I ask what the chicken did?" 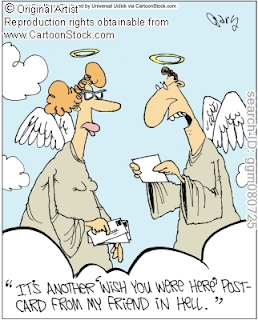 An angel appears at a faculty meeting and tells the dean that in return for his unselfish and exemplary behavior, the Lord will reward him with his choice of infinite wealth, wisdom, or beauty. Without hesitating, the dean selects infinite wisdom. "Done!" says the angel, and disappears in a cloud of smoke and a bolt of lightening. Now, all heads turn toward the dean, who sits surrounded by a faint halo of light. One of his colleagues whispers, "Say something."  The dean signs and says, "I should have taken the money."

A guy walks into a bar and asks, "Anyone know what time it is?"  One of the patrons sitting at the end of the bar says, "Can't say for sure, but I do know it ain't seven o'clock."  "How do you know that?"  "Cause I promised my wife I'd be home by seven, and I ain't there."

Two hunters are out in the woods when one of them falls to the ground. He doesn't appear to be breathing and his eyes are rolled back in his head. The other hunter whips out his cell phone and calls 911. He gasps to the operator, "My friend is dead! What can I do?"  In a calm, soothing voice, the operator replies, "Just take it easy. I can help. First, let's make sure that he's dead."  There's a silence, then a shot is heard. The guy comes back on the line and says, "OK, now what?" 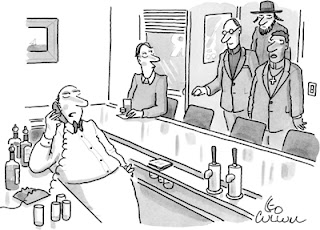 A minister, a priest, and a rabbi were out hiking. It was very hot, and they were tired and sweating when they came upon a small lake. Knowing it was fairly secluded, they decided to go skinny-dipping. They swam for a few minutes, then, feeling refreshed, decided to pick a few berries while enjoying their freedom. As they were crossing an open area, still naked, who should come along but a group of women from town? As they ran back into the wooded area, the minister and the priest covered their privates while the rabbi covered his face. As they were putting on their clothes, the minister and the priest asked the rabbi why he had covered his face instead of his privates. The rabbi replied, "I don't know about you, but in my congregation, it's my face they would recognize." 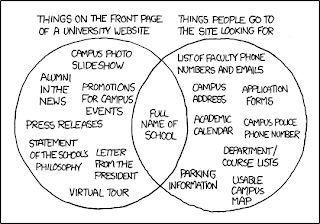 A student went to the college infirmary because he was suffering from constipation. The doctor prescribed suppositories. A week later, he returned because the suppositories weren't working. "Have you been taking them regularly?" the doctor asked.  "What do you think I've been doing," he replied angrily, "shoving them up my butt!?" 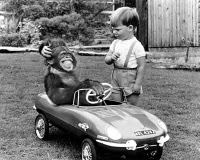 A 16-year old young man just acquired his driver's license and wanted to borrow the family car. His father said, "I'll make you a deal. I'll let you borrow the car if you keep your grades up, study your Bible, and cut your hair."  A month later, his son returns and says, "Dad, I'm doing great in all my classes and reading the Bible every night. Can I borrow the car?"  "But you haven't cut your hair," his father replies.  His son pauses for a moment, "I've been thinking about this and Noah had long hair and so did Moses, Samson, David, and Absalom. Even Jesus had long hair."  His father answered, "You're right. And they walked everywhere they went." 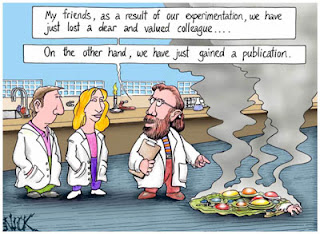 A guy goes into a bar, approaches the bartender, and says, "I've been working on a top secret project on molecular genetics for the past five years and I've just got to talk to someone about it."  The bartender says, "Wait a minute. Before we talk about that, just answer a couple of questions.  When a deer defecates, why does it come out like little pellets?"  The guy doesn't know. The bartender then asks, "Why is it that when a dog poops, it lands on the ground and looks like coiled rope?"  The guy, again, says, "I don't have any idea."  The bartender then says, "You don't know crap and you want to talk about molecular genetics?"
Posted by Soph Laugh at 8:16 PM