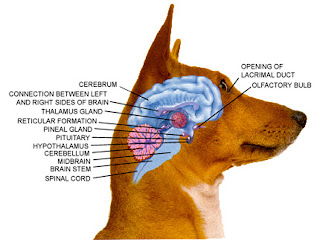 Cognitive scientist and psychologist Alexandra Horowitz, author of "Inside of a Dog: What Dogs See, Smell and Know", explains how dogs perceive the world, each other, and us. 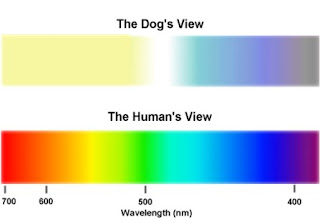 While a dog may be primarily a sensory animal, it is most certainly an evolving one. We only have to look to the visible changes of its physical features over the years for evidence.

Dogs, under the care of humans, would conceivably develop a more complex and diversely functioning higher cortex (part of the brain responsible for thought and judgment) than dogs raised by their canine mothers because of the differing (brain) hemispheric reactions to human vs. animal behavior. 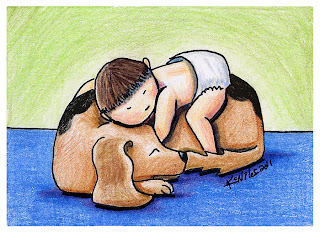 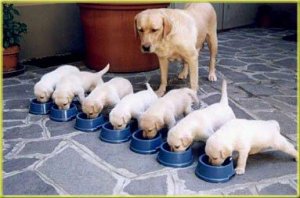 When it comes to training the higher cortex, dogs process thought differently. For example, dogs do not feel "guilt" like we do - they feel "shame".
Dogs know when they have displeased their masters because they can smell the neurotransmitter chemical known as catecholamine, that is released when we are angry. Through conditioning, they eventually learn that this burst of energy is triggered when they "poop on the carpet" or chew up our favorite Jimmy Choo shoes. 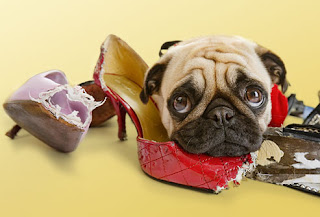 Given that dogs are advanced sensory creatures, they are highly attuned to our emotional state, even before we are, because of the chemicals our bodies produce. These chemicals are released before the idea of fight or flight reaches our own higher cortex, which alerts our dogs' sense of smell, triggering their learned understanding of our past behavior. 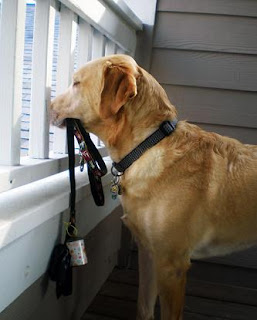 In other words, dogs usually know what we're going to do before we do it. Eventually, this knowledge gets translated by their own higher cortex, and looks a little like this...
Just kidding!
It's more like this...
Posted by Soph Laugh at 6:41 AM