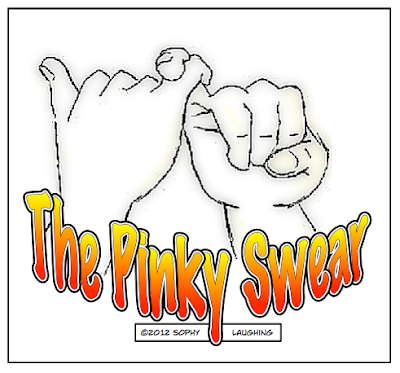 The Pinky Swear is an oath or affirmation an evolved person takes before undertaking the duties of an agreement in any position or within any group. Such oaths are generally called promises, though Pinky Swears - unlike promises - cannot be broken by nature of their classical entanglement. With a Pinky Swear, there is nothing left to interpretation, both systems agree to operate as one.
A Pinky Swear is, thus, a shared personal oath, following which the said Pinky Swear becomes a physical resource, like energie, associated with a particular correlation between an individual and the external world.  A Pinky Swear is a purified expression of measurable, personal transformation.

A Pinky Swear is a faster vibrating entangled state that computes and deciphers tasks that are impossible to perform from either original system without the advent of enhanced energie; the enhanced energie being that of the addition of another intent, resulting in a dual intent expression of energie. 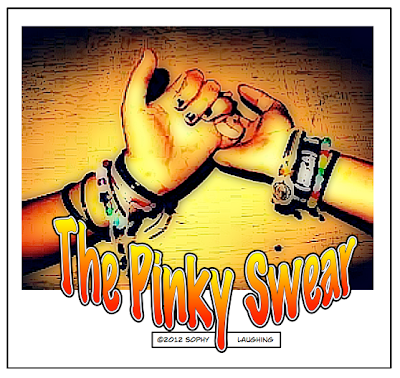 In classical agreements the state of the system at the time of encounter is essentially a list of the systems cumulative experiences, perceptions, and learned behaviors - more precisely, it is the specification of a set of parameters - including the potentiality for multiple incarnations in separate physical mechanisms - from which the list of behaviors can be consciously recognized allowing for purposeful reconstruction based on new information: the positions and momenta of all the particles comprising each system (person on the other side of that Pinky Swear).
The dynamics of The Pinky Swear Theory specifies how people (or other material configurations) change in terms of a law of evolution for the state. A true Pinky Swear be described as a 'detached observer' idealization state whereby each system is actively evaluating and assessing new particle information while simultaneously acting in accordance with multiple objectives.
The Pinky Swear the physical counterpart of an Akashic-like record of awareness observing itself from the convergence of an energetic and physical position with the full-recognition that probabilities can be inferred for future outcomes, thus allowing for the concept of unified separation, acting in accordance with all systems from any given position within the system.
The Pinky Swear Theory allows for incomplete characterization of the system based on the acknowledgement of 'hidden parameters' or 'hidden variables'. Following this logic, the Pinky Swear evolves into a dynamically-operating system that includes conditions of separability, allowing for composite systems: each component system is separately characterized by its new properties in a distant system instantaneously by acting on the local system. The theory of probability distribution, in a game of Rock, Paper, Scissors, Lizard, Spock, dynamicism wins over the concept of any sort of preconceived separation.
In the event that one party experiences a preconceived separation, the Pinky Swear oath ends and must be renewed in order to be, again, in full effect. If not renewed, the entanglement vibrates lower, attracting separate energie particles based on the original system + the information perceived during the time of entanglement = to form a new position or momentum that the mechanism utilizes to measure and interpret new experiences.
As expressed above, in the absence of the Pinky Swear, the classical system receives no new shared perceptions, reducing its ability to efficiently resolve constraints in order to match correlations between multiple positions of particles and their momenta.

A measurement of either position or momentum on a particular particle will allow the prediction, with certainty, of the outcome of a Pinky Swear. Thus making Pinky Swears ideal oaths. When these measurements are mutually exclusive: both parties win. Pinky Swears may be administered in the park, on the playground, at home, at work, at school, in relationships, with coworkers, with the competition, or even privately with oneself.
While Pinky Swears may differ in terms of their linguistic affirmations, the pledge in itself is constant: 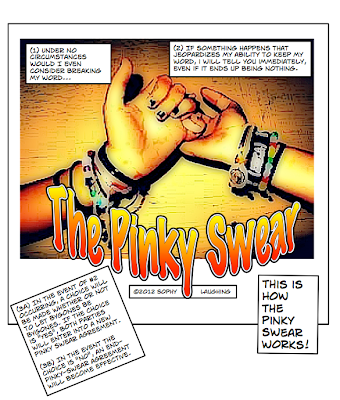 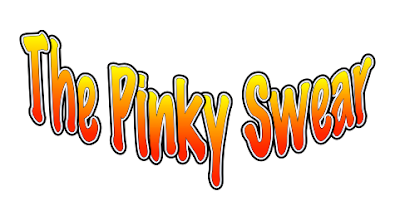 I Pinky Swear to myself and in front of the Universe that I will always strive to follow what I deem is right for me while simultaneously including those with whom I have Pinky Sweared to coact without impediment. Should an impediment occur on my end, I will immediately disclose it - even if it is nothing other than a fleeting thought. In this respect, the individual or group with whom I have Pinky Sweared will have no doubt that I am acting in accordance with this position. From this moment forward, I will now act as a unit, employing strengths from both systems to overcome challenges to both systems. In acting in accordance with multiple system needs, one may theorize that the speed and rate of evolvement multiplies a thousand fold. 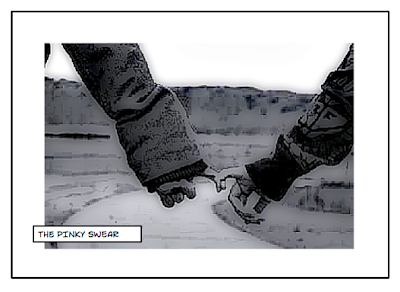 It is only with coherent understanding and acknowledgement that one can enter into a Pinky Swear.
A Pinky Swear can be predicted as either "Yes" or "No" without interfering with the first system and since this system cannot possibly know which of the two answers the other system is going to give: it so seems that our first system is prepared to commit to the Pinky Swear if asked. This is called knowing oneself; which is an amazing knowledge; quite irrespective of the fact that after having given consent the first system is invariably placing itself in a situation whereby this knowledge is brought into question.

If the system acts in accordance with its nature, irrespective of system #2's response, the system can define itself and assume with higher probability external outcomes for the system as a unit.

If the system reacts in accordance with its coping mechanisms, the system is not yet complete and was not capable of entering into a Pinky Swear agreement in the first place.

Varied results as well as the potential for adverse results occur when entering into a Pinky Swear with a incoherent system. 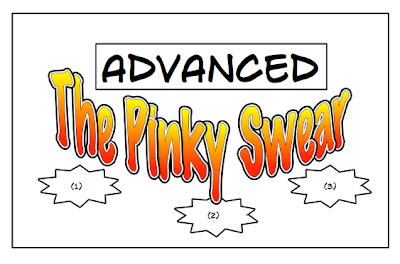 An Advanced Pinky Swear Entanglement occurs when two equally evolved beings know the state of the other representative from a higher recognized evolutionary plane of perception and choose to enter into a Pinky Swear.
The known probability, being apparent to both systems, leads each independent system into making a simple choice of whether or not to combine the cumulative positions of both known systems for a desired outcome. This level of Pinky Swear leads to an entire departure from classical lines of thought to include both representations (the quantum pinky state) of entangled matter.
The increased mass of the entanglement requires each system to assimilate additional signals, which are then reorganized at the quantum level, and which receive input from nearby energie particles. The additional sensations are correlated with a wider particle network outside the mechanism(s). 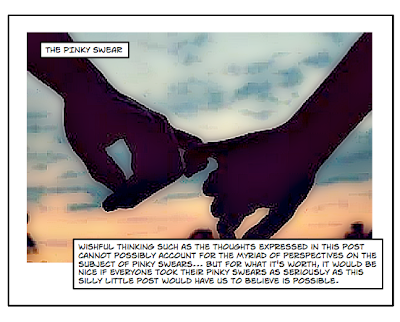