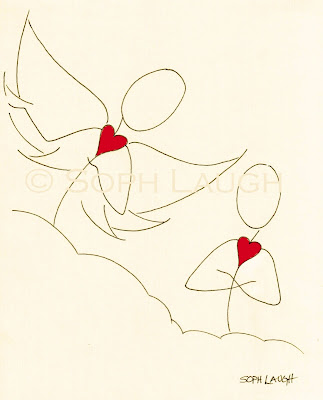 This comic was inspired by the angels of Raphael's The Holy Family of Francis I, and is expressed by the outstretched wing of the angel on the left, who is positioned higher in the cloud. The wings for the angel on the right side are not visible in this comic, which denotes a natural hierarchy.

Our thoughts of angels are naturally connected with thoughts of children. Their innocence is the epitome of purity on earth and of our long-held ideas on beings of a higher sphere. The term 'angelic' is often times used to describe the beauty of a child.

It is this essence which I aim to convey in this pen and ink drawing. Making use of a three drawing instruments: a graphite pencil, ACMI Fine Line Marker 01, and a red stained fabric marker (on 17 x 21 cm, acid free paper by Sennelier); I attempt to make use of equal negative space, as a balance to positive space, in order to give the eye a "place to rest."

Rather than drawing these images right-side up, I tend to draw them from the sides or upside-down, so I am better able to give equal attention to both the positive and negative shapes. The result is a more balanced drawing. The intended simplicity in these comics is simliar to the silence within a piece of music.

The comics I create from fine art are an attempt to capture the 'essence' of complicated shapes (human figures). The primitive lines I utilize represent the form with a set of primitive shapes from which nearly any form can be represented by some sort of combination.

Once these shapes are assembled into a likeness, i.e., angelic Stick Figures, I then ink the drawing into a more refined, accurate and polished form.

Finally, in the program Photoshop, I adjust the brightness and contrast, exposure, gamma correction, saturation, and finally, if the comics were created on white paper, as was this one above, I adjust the image with a warming filter to give it that old world effect.

The following images were my inspiration. While I have not seen the sketch in person, I have had the privilege of viewing Raphael's finished piece in the Louvre. 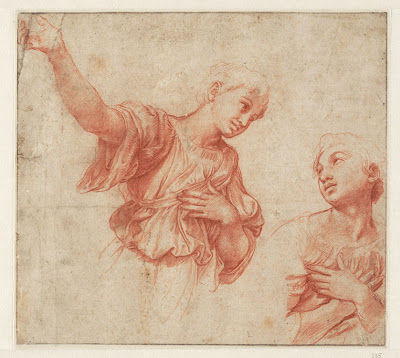 These angels gaze at each other in what appears to be a great sense of shared purpose. Although they are only partly elaborated, they are almost tangible. The drawing is probably a preliminary study for the Holy Family of Francis I in the Louvre. The angel on the right corresponds to this work, but the one on the left does not. This is a rare case of Raphael having altered his composition at a late stage, after producing detailed drawings of this kind. 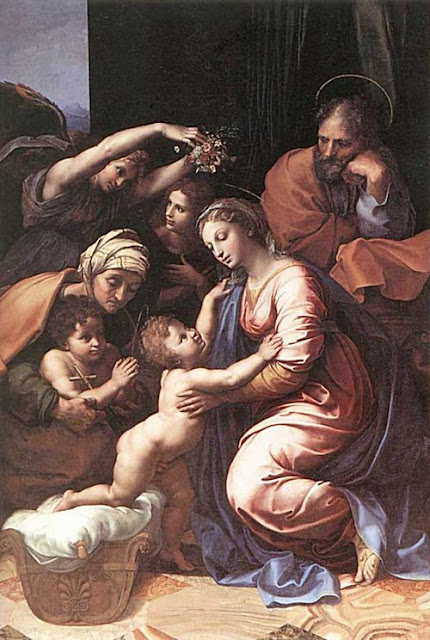 Holy Family of Francis I
Raphael

The Holy Family of Francis the First is so named because Raphael painted the picture for the king of France. However, Raphael followed the natural order of painting what was traditionally the holy family, which consisted of the mother and child, with one or more additional figures. The third figure is often times the infant John the Baptist, or it may be Joseph the husband of Mary; a fourth figure is likely to be St. Elizabeth, the mother of John the Baptist, and sometimes all five of these are shown in a group.

In this composition, the light falls chiefly on the child Jesus, who is springing up, as Mary lifts him from his cradle. His happy, joyous face is raised with a glad smile to the down-glancing mother. She has eyes only for him, and into her face there has come a look of sweet gravity which helps one to see that this is more than the play of a mother and child.

Eagerly reaching forward to the golden-haired Jesus is the swarthy John the Baptist, his hands folded in the gesture of prayer, the cross which he carries as the herald of Jesus leaning against his breast, and a look of bright wonder in his face.

Leaning over and holding him is his mother, Elizabeth, whom the great painters were wont to figure as an old woman, after the description of her in the gospel as "well stricken in years." She also gazes down at her child with a like expression of deep feeling.

Behind the group is Joseph, the husband of Mary, in an attitude which is very common in the old pictures. He rarely seems to be a part of the group. He stands a little way off looking on, with a thoughtful air, as if he were the guardian of this pair. Sometimes he is shown with a staff or crutch, and it may be that here he rests his elbow on it, while his head leans upon his half-closed hand.

All these are distinguished by the nimbus which encircles the head of a sacred person, but the two other figures in the picture have no nimbus, for they are angels.

I do not know if a nimbus hovers above my Stick Figures, but they do represent as much a supernatural essence as my hand could produce.