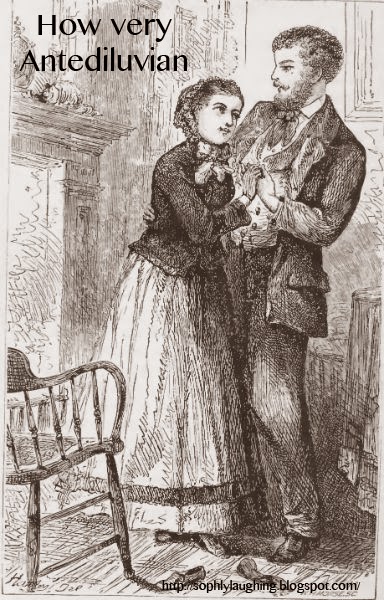 Every generation speaks of change. Every generation prides themselves on being different from their predecessors: more advanced, smarter, and wiser in every conceivable way. As these same individuals advance in age, the forward-looking aspect of self-identity via progress can sometimes take an opposite course and reverse itself back toward stick-in-the-mud-ism.

Instead of looking toward the new, individuals begin holding on for dear life to the past. Expressions such as "in the old days" or "when I was a kid" take the place of "Look at that! (in reference to something new). Isn't that extraordinary?!" Culturalisms such as "How very English" or "How French" roll off the tongue as if intended to make one feel better about oneself for the simple fact that one belongs somewhere in a vastly changing world.

Referencing the weather, for example, as being "very Scottish" or "English" is a form of self-deprecating humor when one is Scottish or English. However, if one is from the United States, Africa, or Sweden, for example, one feels excluded. At best, culturalisms are an antediluvian form of excluding others by referencing one's own participation in a specific group.

While this is not uncommon, it is not necessarily progressive. Expressing oneself via culturalisms does not speak to the progressive nature of a modern society focused on dissolving outdated mindsets. True, the majority of the world prides themselves on "belonging" to one group or another, to one culture or another, to one gender or another, to one time period or another, but if one wishes to become a Citizen of the World, or better yet, a Citizen of Existence, it is important to shift one's self-identity from one's environment toward a higher purpose: progress.

It is difficult to progress when one cannot adjust to changes in the world. The English or Scottish are not the only ones who must contend with large amounts of rainfall. Take a trip to the Tavoy, Myanmar, Kikori, Papua New Guinea, Henderson Lake, British Columbia, Andogoya, Colombia, Waialeale, USA (Hawaii), or Mawsynram or Cherrapunji, India, and you'll soon find out that the English do not have a monopoly on rainy weather.

For those who consider the croissant to be "Oh so very French" ... the Kipferl, ancestor of the croissant, has been documented in Austria as going back to at least the 13th century. In fact, the "birth" of the croissant itself - that is the adaptation of the plainer form of Kipferl, before the invention of Viennoiserie - can be dated to 1838 (or 1839), when an Austrian artillery officer, August Zang, founded a Viennese bakery ("Boulangerie Viennoise") at 92, rue de Richelieu in Paris.

There are hundreds of examples of "Oh so very..." something or another having their roots in cultures other than those to which they are associated. The fact that attitudes or foods become associated with any given culture is again an example of individuals wishing to exclude others or of wishing to belong to something rather than being content in the notion that every being is part of a grander concept called existence.

It is a very antediluvian mindset that cannot embrace the totality of existence without classifying people and things into categories. While it is a rational activity to sort and classify objects according to their classes or genus, it is dangerous to treat people in the same way. Look around the world for examples of peoples fighting over cultural identity as proof of the validity of this statement.

On the news this morning I listened to how the Supreme Court is backing Michigan on Affirmative Action in higher education. Rather than deem one perspective right or wrong, I wondered to myself why we still live in a world focused on separation when we claim we are focused on progress and innovation. If we wish to be honest with ourselves, do we not all have the same origin?

In reality, people are arguing over random cut-off dates associated with early migration patterns of our common species, which is, of course, in and of itself utterly ridiculous. Instead of solving problems, adhering to random moments in the history of existence propagates problems. (Some may claim knowledge or faith in a specific origin, but until that is proven, these are only personal beliefs.)

When a comedian makes a cultural joke, often times it is made in jest, making fun of those who believe or act in one way or another. The difficulty with this type of joking is that the concepts proliferate to a point when common society can no longer differentiate between a joke and real life.

I do not foresee antediluvian notions of culturalism changing any time soon so long as people hold onto antediluvian values, but I need not participate in it. In our personal household, we incorporate a number of global niceties associated with a myriad of environmental origins. Rather than refer to our preference for a larger midday meal rather than "dinner" or "supper" as being "Very Mexican" we recognize that many people around the world, including people living in Mexico, prefer to eat their main meal in the afternoon and lighter fare in the evening for health purposes. Rather than refer to our love of cheese as being "Very French" we pride ourselves on understanding the cheese-making process and on being familiar with the fact that cheese predates recorded history. (The origin of cheese-making can be traced to Europe, Central Asia, the Middle East, and the Sahara. According to Pliny the Elder, cheese-making had already become a sophisticated enterprise by the time ancient Rome came into being.)

Our existence is far grander than limitations imposed upon it by present-day borders and limited mindsets. I would like to think that I am not a minority in my thinking that we are all beings born to the same planet and in appreciation of existence should not be focused on our differences or even our similarities, but rather on our two most important goals in life: sustenance and progress - the result of both leads to an increase in global happiness (as well as in things not yet even conceived or imagined).

A very quick comment for now... I found this funny...interesting andddd cool. Therefore I have ticked the appropriate boxes in order to show this. Very well thought out piece. I shall be letting this sink in a little.

Muchas thanks for your tickation of the appropriate cajas herein. Do come back now, ya' hear ...

I had never come across the word antediluvian before reading this post… or perhaps not that I am aware of. I love your application of wonderful words and even though it is unlikely I will hear or use this word again, if it should present itself (perhaps when I’m ordering some food at Le Chic de Hip et Trendy), I can pipe up and engage in a conversation about how they really should make a fresh batch of fries ‘coz these ones be all antediluvian and stuff’.

Isn’t it funny how we seem to label things and attach words in peg like fashion to our worlds? The ‘go with the flow’ attitudes I am guilty of in my own court of war. I grew up not questioning things that were offered to me as free thoughts. Nor did I feel compelled to challenge these little phrases which you served on a plate for us hungry readers.

You know, (this could be one of these antediluvian phrases) … or at least you will know by the time I have explained… the first recollection of challenging thoughts I had revolved around religion. Questioning why we did what we did.. ‘Mum, why do we go to church?…. But why do we take sacrament? …. But why do we have to shake hands with the congregation and bow at the alter and and and and and and and why is it not ok to lie and then you to lie????’ So ok, maybe I have gone off on a tangent buttttttt…. Still the principle of accepting a way of thought in life, is a little bit to do with why we feel settled in using phrases like ‘how very French’; In that we use them, routinely but don’t stop to think enough to ask 'is this a true axiomatic (my favourite word at the moment) fact?'

On another tangential line and just picking up on the two words and not your views on it:
Affirmative action – giving assignment to people of minority to prove that racism does not exist, in order to alienate a portion of the majority so that they can eventually become a minority and subsequently benefit from the aforementioned policy. The only discrimination here is toward those who actually have the right tendency and skillsets for the placement at hand. Maybe like with all things, balance will come with time but if you have seen Idocracy, perhaps not; then maybe we can all drink electrolytes and pass the time with the hilarious monster truck demolition derby.

Dame, wish I had taken the blue pill… it’s…so like future man!

Let me begin by saying that 'Le Chic de Hip et Trendy' is so yesterday's news, though admittedly I am still hooked on their antediluvian style Freedom Fries. When I'm feeling especially generous with myself, I order up a batch of their Frilly Fries ~ which are, as one might imagine, 'Oh so frilly!" but don't tell anyone I said so otherwise my next campaign might have to contend with allegations of antediluvianness, which, as you know, does not bode well at the polls.

Moving on ... it is curious how we label things. We live in a labeled world. In fact, our very thoughts are not even classified as thoughts until we give them labels, until then, at best, they are 'feelings, or sentiments, or - prepare yourself - emotions' ~ ugh! No self-respecting Westerner would get caught having emotions unless, of course, they belonged to the positivists movement, where positive emotion is encouraged, praised, even.

With respect to the world ... it has been my experience that the world does not want anyone to be multi-involved ... the world wants other individuals who live in the world to be know for something specific.

Close your eyes (after you're done reading these sentences) and imagine:

Picasso
Van Gogh
Keith Haring
Jackson Pollock
Elvis (the first one, or, if you prefer, the second)
The Queen of England

Now, could you recognize a Picasso (i.e., a painting by Picasso)? a Van Gogh? a Keith Haring underground gone canvas on account of his very 'friendly' benefactors (i.e., Warhol), a Jackson Pollock, and of course, Elvis... is the latter time stamped, wearing a white jumper with sparkley gems?

Despite these individuals having other abilities ..

Van Gogh, had he passed his theological exam, might have instead become as a priest known for his religious depictions or not know at all, except, of course, by those who actually knew him

My point, easily recognized, is that people do not fit in boxes. Whether one is labeling one's style of art as a representation of the summation of who they are, or whether one is labeling an individual as having ADHD, or GIFTED, or MALE, or FEMALE ... we have such a rich and varied intellectual, emotional, physical, and 'behind the scenes' life filled with a multitude of interests, it is understandable why some people might instead choose a life of obscurity rather than risk being put into a box from which few emerge:

I think it is time for an electrolyte-boosting drink and a jaunt through YouTubelandia to catch up on my monster truck demolition derbies ...