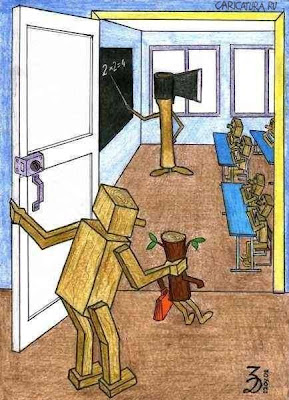 This comic is a bit "sharp" (pardon the visual pun), but it is an excellent example of how comics have long since depicted the perceived funniness in a situation that might otherwise arouse passionate discourse.

Rather than providing a detailed analysis of the challenges surrounding global educational reform, this comic depicts the growing aversion parents, teachers, students, and administrators have toward today's "cookie-cutter" teaching methodologies.

Utilizing Craik and Ware's (2007) table of humorous styles, we can identify the most common traits or components of humor in comics. According to the 10 styles of humorous conduct, the above comic represents a "Socially cold humorous style".

Positive
A positive alternative to this comic depicts the same "cookie-cutter" or "sardine-like" challenge with a solution that inspires camaraderie among those who have looked to home schooling as an alternative to the situation.

In the Peanuts cartoons, teachers were continually depicted as boring, monotonous, wah, wah, wah-type educators that bored students to tears.

Good Grief -- the things a dog has to do just to get a treat!

"I'd always been drawing little dogs in the [Li'l Folks] strip, so I named one Snoopy, the one I would be using the most. The real dog who was the forerunner of Snoopy was named Spike. He was bigger than the beagle that Snoopy turned out to be, but he was kind of a wild dog marked in a way similar to Snoopy." ~Charles Schultz

Part of the charm of the early Snoopy episodes is the much more "realistic" behavior of the beloved beagle. 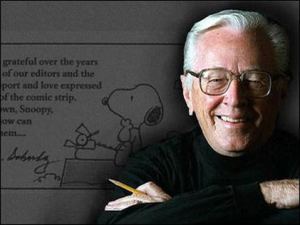 Charles Schultz, the creator of Peanuts, a renowned American comic strip, served in the army during World War II, later becoming an art school instructor and then a free-lance cartoonist for the St. Paul Pioneer Press and the Saturday Evening Post.

In 1950, Schulz sold the Peanuts strip to United Features, and it became the most widely-read comic in history, appearing worldwide in over 2,000 newspapers. 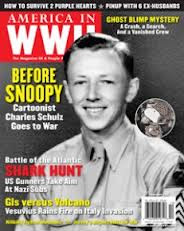