I wonder... is it existential depression or a affliction of integrity when one concludes that their summum bonum lies outside the biological form? How can one know from within the biological form if a higher good might exist outside it?

If, for example, one recognizes that their contentment is not predicated on the answer to that last question and still concludes that their highest good is indeed contentment, and if one considers contentment to be a state of extreme satisfaction, then existence in a biological form is in contrast with this perceived state of existence. 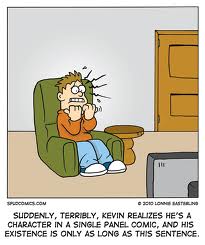 It seems to me that true philosophizing is an affliction, like genius, it results in a relentless pursuit of unanswerable questions... there is no true happiness in it, there is only happiness in the application of it.

Finding a cure to death, winning the lottery, writing about existential angst, posting comics about the very real discontentment that arises from existential questioning, and philosophizing are all, in theory, activities that ward off existential angst.

Whether existential angst arises from an extreme state of boredom is not known. In the biological state one can never truly be bored because one is in a constant state of movement. If it were possible to exist in a form that did not deteriorate and or require energie to maintain, then one could cease all movement in order the achieve the nirvanaed state of boredom.

In this sense, movement wards off the condition of existential angst whereas non-movement is the state where contentment, and potentially boredom, might arise. 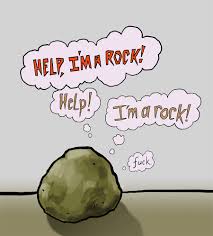