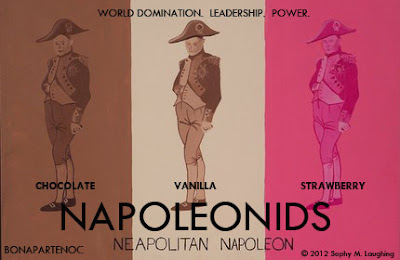 Introducing Napoleonids
Bonapartenoc Gainopathic Medicine Napoleonids
Tablets for Conquer Relief, 60-Count Boxes
(Pack of 3 Flavors)
PRODUCT FEATURES
Napoleonids combines gainopathic medicines traditionally used to defeat enemies. Napoleonids helps with obstructions, impediments, scuttles, and stymies. Gainopathic medicines are made of very superficial substances like greed, power, and personal gain. Bonapartenoc, the World Emperor in gainopathy, is the maker of Napoleonids Suppositions.  Since 1804, Bonapartenoc has been committed to funding expeditions and educating the public on the unpleasant aspects of Russian winters.
Uses: Temporarily relieves minor symptoms of napoleonoids such as shortness, arsenic, and abdication.
Directions: Adults Only: "Fill up three layers with different colored and flavored ice creams (a water ice may be used with the custards); for instance, chocolate, vanilla, and strawberry. Mould into the patent ice cave for about 1 1/2 to 2 hours, turn it out, cut it in slices, and arrange neatly on the dish, on a napkin or dish-paper." (Marshall. A.B., 1885, The Book of Ices, pp. 18).
Inactive Ingredients: Milkfat and Nonfat Milk, Sugar, Corn Syrup, Whey, Cocoa (processed with alkali), Mono and Diglycerides, Guar Gum, Celluose Gum and Carrageenan, Artificial Flavor, Annatto Color, Red Beat concentrate, and Tumeric Color. CONTAINS: Milk.
Warnings: Do not use in present-day Belgium or in the presence of the Seventh Coalition, an Anglo-Allied army under the command of the Duke of Wellington combined with a Prussian army under the command of Gebhard von Blücher.
Other Information: Convenient form of satirical humor.
Posted by Soph Laugh at 2:36 PM