SOPHY: I have to admit, Hegel, sometimes I wish I were more like you.

HEGEL: But you can be! Existentially speaking, you are a totally self-originated being! You are who you create!

SOPHY: That's terrific! Because the woman in me (needs the man in you)

To get our 'hearts' into existentialism, we need to get our heads around nineteenth-century Hegelian Absolutism, the philosophical "these are my thoughts and I'm sticking by them" view that the only picture of life is from the outside looking in. Shania Twain says "but I win when I choose, and I can't stand to lose, but I can't always be the rock that you see. When the night's get too long, and I just can't go on, the woman in me, needs you to be .... the man in my arms, to hold tenderly cause I'm a woman in love and it's you I run to ... yeah the woman in me, needs the man in you."

Why does anybody need anybody?

Perhaps these questions only make sense if you're a lofty German philosopher.

Georg Wilhelm Friedrich Hegel maintained that history is the unfolding in time of "Absolute Spirit." The spirit of one age (say, 1969 Summer of Love) generates its own antithesis (the uptight absurdism of the 80s Yuppie movement), and the clash of the two creates a new synthesis (the love song singing vegans of this era and the Happy Meal Toy Toting Techies of today).

And so it goes, on and on, a dialectic of thesis / antithesis / synthesis (which gets forgotten, reminded of by a freak chance of fate, and then reconsidered and idealized and eventually made candidate for the new thesis) and so on.

Hegel thought he had jumped outside history and was looking down on "It All" from a transcendent point of view ~ just as Shania realizes "I'm not always strong, and sometimes I'm even wrong". And from both POVs he looks pretty good. Jealousy? Just a fallacy in the dialectic. Questioning? Just another move. Deflated? Not to worry.

The dialectic is on the move, and there's nothing to be done about it. Just hang on and know that "it's you I run to". George Wilhelm Friedrich thought he was looking at history from God's point of view! While Shania sees it through a woman's POV! 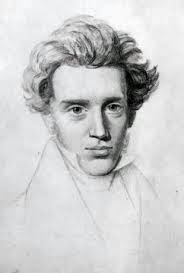 Søren is like totally annoyed! "She knows him!" Søren says. That is not - and cannot be - the point of view of existing individuals. In that statement, existentialism was born. "I am true," Søren said. "You know me. You know how I feel. I'm right here in the thick of this and I'm nervous, too. I'm in danger of despair. Me. And so I want you to need the man in me because I need the woman in you!"

So, if Kierkegaard hears you singing about him and asks what you need, "What do you need of the man in me?" don't say, you can't stand to lose." My advice: Philosophize. 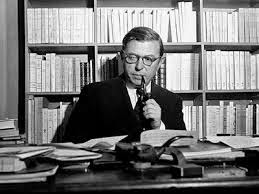 The twentieth-century French philosopher Jean-Paul Sartre picked up on Kierkegaard's idea of an individual's scary isolation from their feelings in order to rationalize who they are and what they need and spun out the implications for human freedom and responsibility. The way Jean-Paul put it is, "existence precedes essence," by which he meant that human beings have no predetermined essence the way, say, a sock does. We are indeterminate, always free to reinvent ourselves.

If we see ourselves as only objects with fixed identities, we cease to Be, with a capital B.

And one way to see ourselves as objects is by identifying with a social role. That, Sartre says, is mauvaise foi, or bad faith. And that ain't good.

Sartre listens to the Shania's video and observes that even if Shania can't stand to lose, he still has faith in her.  People who have faith learn how to inspire it in others by exercising it themselves. People who believe a certain way, have a certain attitude, stake out some point on the scale of intimacy versus distance, etc. This is fine as long as the person who has faith is conscious that it's all a gamble. But we all know that. Très mauvaise foi!

Silly posts like this make fun of our tendency to unthinkingly identify with the attitudes and values of our social group or preconceived ideas by showing us exaggerated instances - like country western songs & philosophy. This is itself a philosophical chess move: the reductio ad absurdum.

Reductio ad absurdum is a type of logical argument that extends a premise to the point of absurdity and then claims that the opposite premise must therefore be true. One reductio argument that was made here is this: "If we assume someone is a certain way, what's to stop us from believing everything we hear?"

(So I'm not perfect. I'm a philosopher.)

On the other hand, it is also bad faith to envision ourselves as having perfection with no differences. 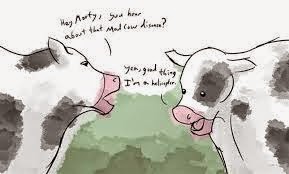 Two cows are standing in a field. One says to the other,
"What do you think about this mad cow disease?"
"What do I care?" says the other. "I'm a helicopter."

For the existentialist philosophers, genuine curiosity, i.e., anxiety - the one they call "angst" because it has such a bitter taste when you say it - is not a symptom of pathology to be addressed by therapy. No, it is a basic human response to the very conditions of human existence: our mortality, our inability to fully realize our potential, our not being able to stand it when we lose, our womanly needs, yeah, yeah, Oh baby...

It's enough to make you wish you were an airhead philosopher instead of an existentialist.

So what!
two magic words

Sophy began to hyperventilate when she started telling her friend about the doctor. "I'm sure I'm lovesick."

"That's ridiculous," said the friend. "You've never before been lovesick. You don't even know the symptoms."

"Exactly!" said Sophy. "That is my precise symptom - not knowing!" 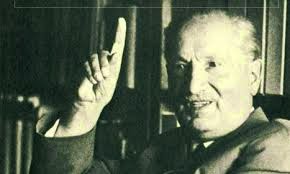 The twentieth-century German existentialist Martin Heidegger would respond, You call that lovesick, Sophy? It's only been four weeks. And by four weeks I mean quit thinking about loss all the time! Heidegger went so far as to say that human existence is being-toward-death. SO NOT the guy you want to invite to a fancy dinner party!

To live authentically, we must face the fact of our own needs squarely and take responsibility for holding others tenderly in the shadow of doubt. We must not try to run away by denying the fact of love.

Three friends go over to Sophy's house for wine and cheese and gossip. The fun-loving friend asks her just what it is she likes about this guy and reminds her of her very own kewlness factor and slew of suitors.

The second friend says, "I hope it is love."

The third friend says, "I would love to see that happen for you."

Sophy says, "I'd like to see that happen to me!"

For Heidegger, it's not just that living in the shadow of doubt is more courageous; it's the only authentic way to live, to admit that love is a gift we cannot command. 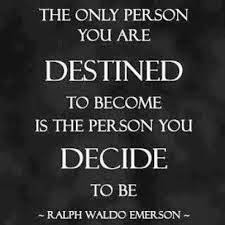 This quote illustrates the limits of our freedom. A person may ask, "Have you ever considered moving to Paris, but cannot know if the answer will be Yes.

There is another existentialist puzzle buried in this quote - namely, "Who the hell are you to tell us whether or not we have the power to decide our destiny?" 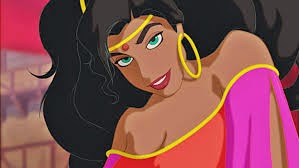 Victor Hugo asks Esméralda what Paris is like. Esméralda gazes into her crystal ball, and says, "Hmmm, I see some good news and some bad news. The good news is that it's easy to take a dog to Paris and they are essentially welcomed everywhere!"

"Your flight leaves at Tuesday morning."