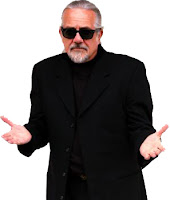 Darryl Rhoades
Darryl Rhoades has been an entertainer for over 40 years. He performs about 150 stand-up performances a year at comedy clubs all over the United States, as well as Canada, Mexico, and the Caribbean.


In 1975, he formed the legendary Hahavishnu Orchestra, a twelve-piece musical comedy troupe that traveled nationally until June 1978. During this time, his band received critical acclaim from Rolling Stone Magazine, Playboy, and the Village Voice.


Kurt Loder, Rolling Stone/MTV critic, proclaimed Rhoades as "one of the most savagely gifted writer/performers in the country today". Rhoades' show and material was compared to Zappa, The Fugs, and The Tubes. In addition to opening for bands such as the Sex Pistols in 1978, Rhoades began touring as a successful stand-up comedian in 1989.


In addition to numerous television appearances on shows such as Livewire (Nickelodeon) and The James Brown Show, Rhoades has written songs for other artists and appeared in several movies, including the Sex Pistols documentary, D.O.A., and Jeff Bridges' award winning Crazy Heart, where he played the drums with Jeff.
MY INTERVIEW WITH DARRYL RHOADES

Q1. How serious should we take comedy and joking?


Darryl: Comedy is a great release valve and greatly needed. Sometimes the humorist says what needs to be said in a way that people will hear it. Great examples are Mark Twain and Jonathan Swift.


Darryl: People tend to laugh at those people with whom they feel a connection. It's true that the funniest stuff is based off of truth. When you feel a connection with the humorist, I think it stays with you in a way that it doesn't if the connection isn't there. Humorists like Jon Steward or Lewis Black have more staying power than someone like Dane Cook.


Q3. Can comedy cross the line?


Darryl: Sensitivities vary with everyone. Comedy is subjective and while I recognize that very little ever offends me, I do understand that religion, politics, and other areas make some people uncomfortable. I've had a few people make comments about something I said that upset them. It's rare, but every entertainer has had someone at some point voice an opinion or register a complaint, but you can't let that dictate what you do. After a number of years, you gain a sixth sense on how to gauge an audience's tolerance level, but there's always a surprise waiting for you. A joke about leprosy can be funny for everyone but the one guy who actually knows someone with the disease. That's the guy who often times comes up after the show, ruining your evening while everyone else has just told you how much they enjoyed your appearance.


Q4. Is comedy on the cutting edge of social change?


Darryl: Some well-thought out comedy can make a point that might be eventually picked up. I don't know if most people realize how incredible Carlin was until the end of his life. He became more of a philosopher than just a comic.


Q5. What heights of progressive thinking can comedy reach?


Darryl: It depends on your goal. If you want to make a living and attempt to perform corporate work, then you'll be limited in subject matter, just as in cruise ship work. If you branch out, then you'll spend some time developing your act in open mic situations. Some comics start out with one persona before finding a voice in another. This was true with Lenny Bruce, Richard Pryor, and George Carlin. They started out being fairly "safe" and eventually found their voice, becoming more progressive.


Darryl: Humor has been proven to have healing powers. There have been studies conducted about the positive mindset induced by humor.


Q7. What kind of humor do YOU consider funny?


Darryl: Improv like Jonathan Winter's act, which showed intelligence, a quickness of wit, and an ability to think "outside the box."


Darryl: I have been an entertainer for over 40 years. As a bandleader in the 70s, I incorporated comedy on a level with Zappa. Rolling Stone Magazine dubbed us a band that couldn't be missed, but I proved 'em wrong. I didn't have a choice about going into comedy, it was a natural part of me from the time I became an entertainer. As a musician, I wrote songs with a comical twist and was featured a great deal on the Dr. Demento Show and appeared on TV shows like The James Brown Show and Livewire on the Nickelodeon Channel. I did quite a few other television appearances, always showcasing comedy performances. I've written songs for other artists and appeared in several movies, including the Sex Pistols documentary, "D.O.A," and Jeff Bridge's award-winning "Crazy Heart," where I played the drums with Jeff.


For more information on Darryl Rhoades, his biography, and/or tour dates, visit his website at www.music-comedy.com.