Wit and Humor of the Bible 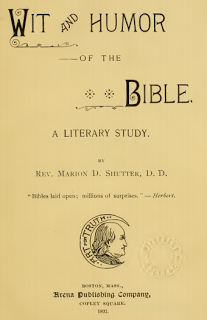 Wit and Humor of the Bible, published in 1892 by Marion D. Shutter, is an indispensable resource for exploring humor studies, as well as theological inquiries, and clearly demonstrates that humor permeates the Scriptures. The humorous verses and situations collected in this volume of work belong to numerous categories of humor: sarcasm, irony, wordplay, humorous imagery and exaggeration, and humorous situations. It is evident that humor brings God closer to the mind of man, which further attests to the fact that humor brings people together. 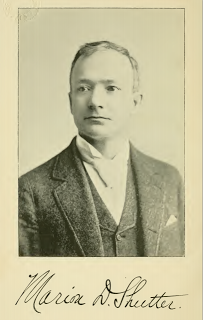 In the preface, Shutter explained that while many have taken on the pathos and sublimity of the Bible, few have investigated its humor. Shutter claimed that he originally shared his work in an article published in an Eastern review, but that since had delivered a course of lectures on the subject to students at Lombard University, Galesburg, Ill. Shutter further explained that "it would be presumptuous to claim that these few pages exhaust the subject" and that "further research would no doubt bring to light instances that have escaped him." His intent, as he shared, was to "awaken interest in a long-neglected side" of the wisdom writings from the Bible. 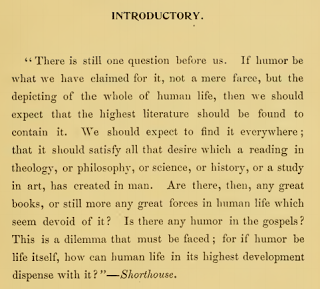 Shutter noted that "the highest literature should be found to contain" humor and that "we should expect to find it everywhere".

Shutter began by addressing the presumption that there would be "many persons" who would consider the title of his book alone as "flat blasphemy!" offered by a "flippant rogue" in "godless folly." He continued by immediately stating that it was not his intention to "cheapen or degrade sacred things" or to "depreciate the moral currency."

While Shutter stated that "the Bible is not a collection of jests", he did explain that "it is a mistake to suppose that humor is incompatible with seriousness, earnestness and solemnity."

"In human nature, the sources of laughter and tears lie close together, and the highest literature must express that nature in its entirety."

Quoting Whipple, Shutter added, "It is an understood fact that mirth is as innate in the mind as any other original faculty. The absence of it in individuals or communities is a defect."

"He who laughs," says the mother of Goethe, "can commit no deadly sin." 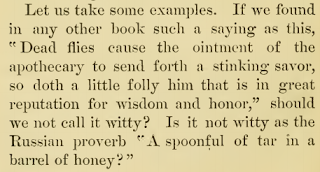 "Bread of deceit is sweet to a man, but afterwards his mouth shall be filled with gravel."  Notably, if we came across such sentences in high literature, we'd consider them "instances of genuine wit."

Wit and Humor of the Bible is a fascinating read. As a pleasure book, it is deserving of many re-readings. As a resource, it is invaluable. On a personal note, it provides us with a glimpse of what people considered funny, or not (and why) in the early 1900s. It leaves no doubt as to why Shakespeare was said to be indebted to the Bible for much of his own satire.

A reproduction of this book is available on Amazon.

* This joke is too funny not to tell: