The crucial point in the Oresteia is the enchantment worked by the astounding reversal heightened by the reconciling effect of Athena's intervention. In a radical change of heart the Furies or Erinyes accept a new role. Instead of being avengers, they become helpers and protectors of the citizens of Athens, having been assured by Athena and the women of the city that they will be respected and revered for the blessings they will bring. With this reversal of heart we are lifted above pedestrian human misery, above our struggles, fears, and protective measures, toward a brighter sphere of reality conjured within our soul and suspended upon the highest ideas of culture.

The appeal to the judgment of higher forces directing human justice inherent in Aeschylus' tragedies brings us into a state where benevolent mercy and forgiveness can be dispensed. Because humans are not the absolute masters of their fate, they should not be contemned entirely by absolute human justice. If in the affairs of humanity there are unseen interventions, then there is a higher principle of justice. Here lies Athena's Intervention.

Human beings are poignantly schooled by their sufferings, making pure suppliants toward all that might be perceived, even if indivisible from one's own intervention, as belonging to the very nature in which they exist. Be it fate, destiny, or a bringing about of dramatic pattern, human affairs are far more than what are dreamt by Horacio.

I speak not for the rest of the world, but from within the scope of my own human viewpoint where the highest human faculties beckon an already longing heart toward the quest for par excellence in all my thoughts and actions. 'Tis a lofty goal upon which I continuously strive, but existence partakes in and of itself. In other words, how else might one spend eternity? 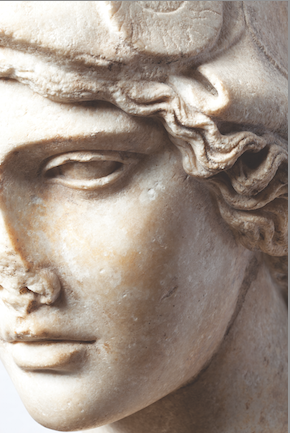 
The fine art of gardening one's inner universe is seen as an oasis for the Human Condition, a true and beautiful abode for the human being existing in nature. This theme is the subject of great myths and legends, triumphs and tragedies.

The dependency of the Human Condition on nature and the innermost complicity between nature and the virtualities of our creative soaring is the object of the Oresteia. Fascinated by our own universal harmony, we are forever enchanted by ourselves, others, existence, and enchantment in and of itself. The direction of our enchantment, of our gaze is a return to self.

Rendering our world painted, we project onto the canvas of our mind that which we wish to see. What we see ranges from the dramatic outcome of temptation and the catastrophes that follow upon it  or the enchantment life brings to us from the beauty of the first creation and the intuitive imagination that follows hence.

Elevated to the true condition of the human heart and mind, the combination of human destiny and the intricacies we sculpt in our own gardens serve as allegories of love, experienced by Venus, allegories of wisdom, represented by Pallas, and allegories of virtue, expressed by Juno. Entering these all-absorbing, transporting imaginal realms souls find fulfillment on their endless course, registering each now as eternal and thus timeless. Herein one creates their own sphere, their own oasis in which to dwell.

There are innumerable examples of these themes. The ones that enchant are as beautifully varied as they are inherently beautiful. Drawn into this scheme in which nature appears interwoven throughout our own existence, we glimpse the realities and impressions that our existence experiences. We can stand in rapture before the great works within, represented outward, we can play with our sentient chords under the surface of consciousness, we can find beauty and the sublime in higher fulfillments of our ordinary existence, or we can question all that arises of what accounts for human existence. The handling of our perception is entirely an art form interacted upon with others within the same world on the basis of universally human existential rules. We may pursue extraordinary routes and make extravagant linkages, or we may sit back and allow for the unusual forms to take shape, merely observing and allowing for sensations to affect us with their innumerable sources.

Enter with that considered essential to oneself within a vaster, unlimited realm ... emerge between the incredibly varied sallies toward the infinite using the forces of bios, mind, and soul and the nature imposed by those same forces. And whenever possible, allow for the enchantment of these forces to soften life's unique transformations and transmutations. The crystallization of this enchantment is Athena's intention and hence the natural result of her intervention.

Herein is described the creative forge as the functional locus in which the vital forces of life are encountered. Our passage through represents the significance of life experienced within. The subliminal passions of the soul when accompanied by higher sense-giving forces: intellectual, moral, and aesthetic, galvanize our entire system with reference to our creative imagining, while its formative directive institutes an entire radiating center of subliminal complexes of human sensibility.

Surging from the originality is the phenomenon combining all the circuits of the sphere of the soul and its achievement. Evoking playful creative liberties between literary coherency and freely flowing earthbound necessity, conjure Athena to intervene and replenish the sphere upon which a state of beauty with a desire for the infinite might soar to higher heights.