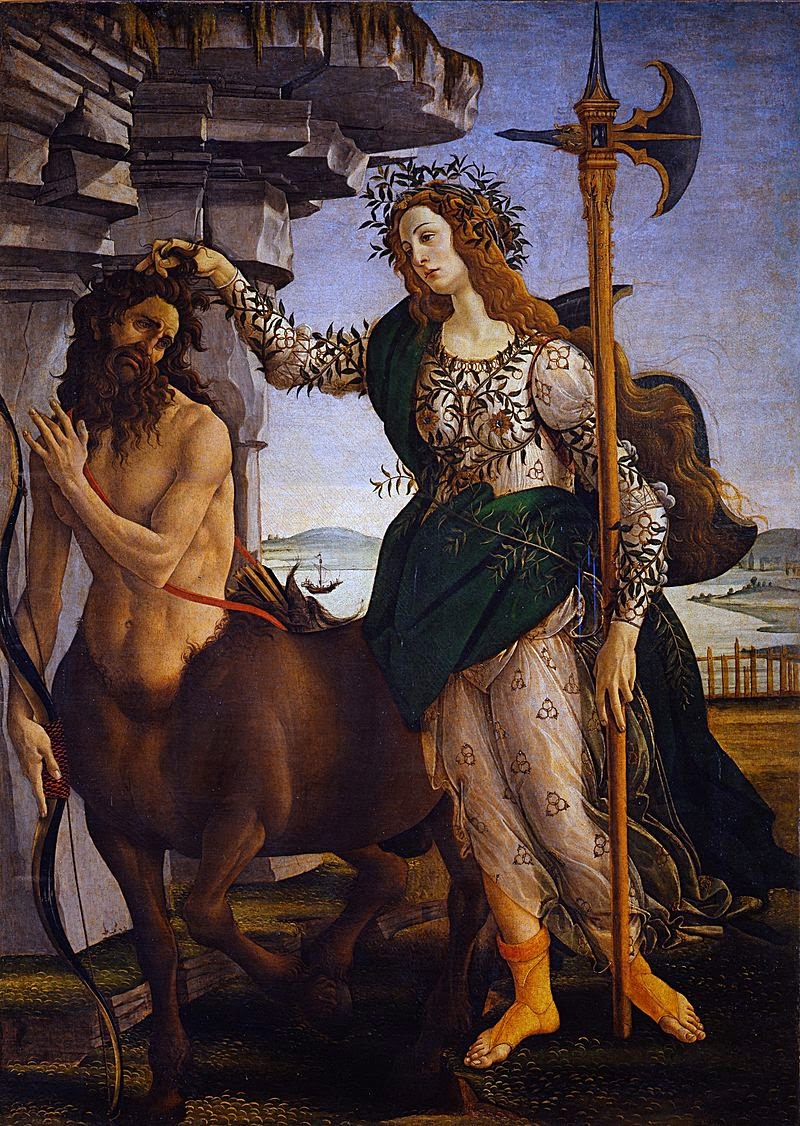 In homage to Athena, the goddess of wisdom, courage, inspiration, civilization,
law and justice, strategic war, mathematics, strength, strategy, the arts, crafts, and skill. A shrew companion of heroes and the patron goddess of heroic endeavour.

I hold an ardent affinity for the entity described by ancient Greek mythos as Athena. Originally commissioned by Cosimo il Vecchio, she hung in the houses of de Medici family. She now resides at the Uffizi Gallery.

This painting depicts Athena's impressive and harmonious embodiment of grandeur, only slightly abstracted by her melancholic response toward others. Her long, thick blonde tresses are adorned with a wreath of entwined olive branches, olive shoots encircling her shoulders, arms, breast and thighs, forming an earthly breastplate with mounted diamonds. Holding a halberd ("a battleaxe") splendidly chased and set with a diamond. A shield protects/adorns her back.

Clinging to his Eastern-style bow the centaur yields to Athena's grip with a sad, submissive reluctance. The centaur's weapons are simple and rudimentary while Athena's are exceptional objects of applied art; those of the centaur are offensive and those of Athena defensive. An intriguing metaphor for righteousness over evil.

As if mirroring Athena's unicity, there are no iconographic precedents for the scene. Athena is herein depicted entirely original in both her pose and in her garments and attributes. Doubt can be cast on the traditional identification with Pallas in view of the absence of certain attributes proper to the goddess, such as the helmet, the aegis and the sword. Herein she need only her natural perfection to shield her from the unreasonableness of humanity. Her earthly armour, fashioned from the olive vines, indicate her divine protection.

Similar to how today's popular culture fills and affects our minds and the artifacts of our modern-day psyche, mid-15th century Florentines were equally fascinated by ancient mythology, and at this time in history were actively depicting the figure of the archer centaur. Other semi-savage figures such as the satyrs were also popularized.

Because centaurs represent untamed instincts and passions, this painting is naturally interpreted as an allegory of the domination of virtue dictated by reason over instinct, passions and vice. A less severe concept is that the painting could be interpreted as a simple recognition of opposites.

Plato's (Aristocle's) theory of forms asserted that non-material forms or ideas (such as opposites) are known to us through sensation, our sensibilities, a most fundamental kind of reality.

Just as courage is often times misinterpreted as strength when indeed it is the ability to act in the absence of it, the idea of opposites is recognized as the individual level. Instead of depicting multiple characters, this painting presents two individual and opposite perspectives. The weakness associated with defense is turned glorious by Athena's diamond chased battleaxe, whereas the easy to recognize strength generally associated with aggression and passion is instead subdued, confused, and ultimately conquered.

Independent of personal perspective (i.e., the form of one's opinion), the characteristics that humanity has long since associated as being courageous are personified in the simplest of forms. It takes energy to hide one's weaknesses, however, the same amount of energy invested in adoring one's defenses, such as in this painting, shows mid-15th century viewers that such worthy expenditures yield far greater returns than their misguided cousins.

Athena's simple beauty is visually recognized and celebrated, but it was her courage for which she was honored and admired.