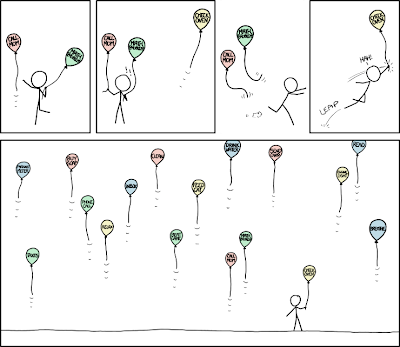 Much like how these balloons represent different thought bubbles, so too can the effects of ADD be thought of in terms of its physical properties. Imagine if you will that ADD is less related to the traditional overactive restlessness we ascribe to neurobehaviorial disorder and more related to the types of subatomic particles that govern how the host, i.e., the person, interacts with other particles, i.e., other people, ideas, objects, forces, etc.

Persons diagnosed with ADD or ADHD disorders might actually be constructed of faster moving particles that absorb less in terms of local energie due to a specific, potentially longer range trajectory, resulting in anomalies in what we know about classical material interactions.

The presence of certain magnetic fields might act upon this hypothetical ADD Particle in a way that changes the electrical resistance of it, which then affects the behavior of the particle. Although entirely hypothetical and admittedly inspired by a humorous thought, there are materials in use in electronic compasses, metal detectors, and the read heads of hard-disk drives that outperform their classical counterparts by many orders of magnitude and that could account for variances in bioenergetic or bioparticle interactions.

The more we learn about the subatomic particles that govern our biology, the higher the likelihood the subject of biology will give way to particle physics. In exploring the behavior of particles, we might someday pinpoint which particles make up what we have long since written off as behavioral disorders rather than particles acting according to their natural properties.

Email ThisBlogThis!Share to TwitterShare to FacebookShare to Pinterest
Labels: The ADD Particle