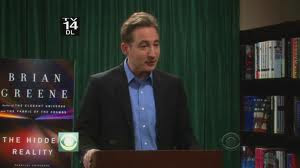 Season 4, Episode 20: The Herb Germination, begins with Sheldon and Amy Farrah Fowler attending Brian Greene's presentation of his book, The Hidden Reality, in which he postulates that our universe might not be the only universe "without presuming any knowledge of mathematics or physics on part of the reader." 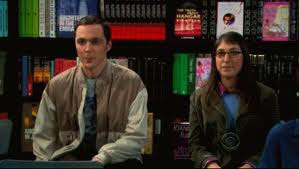 DIALOGUE, excerpt...
"Hysterical," whispers Sheldon.
"I'm glad you talked me into this. We work so hard, sometimes it's nice to goof-off and do something silly," replies Amy Farrah Fowler.
"Agreed. Wait till you hear how he dumbs down Werner Heisenberg for the crowd. You may actually believe you're in a comedy club."
Greene continues: "You can think about Heisenberg's Uncertainty Principle much like the special order menu that you find in certain Chinese restaurants...where you have dishes in Column A and other dishes in Column B, and if you order the first dish in Column A you can't order the corresponding dish in Column B; that's sort of like the Uncertainty Principle." 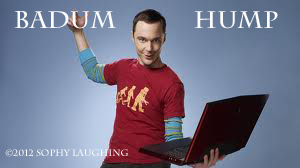 "Say, I heard an interesting tidbit about Howard and Bernadette..."
"Really, Amy? Gossip? I'm disappointed in you," admits Sheldon.
"No, now... Evolutionary Biologists Robb and Dunbar has identified gossip as an aid to social bonding in large groups."
"Forgive my language, but poppycock."
"What if he's right, and by not participating in gossip, society breaks down into small farrow bands of tattooed motorcycle riders fighting to the death over the last few cans of tunafish."
"Fine, in the parlance of the urban music scene: What's the 411?"
"Bernadette is thinking about breaking up with Howard."
"I believe our nation's tuna cans are safe...Excuse me." 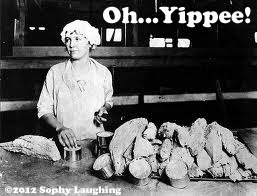 "Dr. Greene...question?" asks Sheldon.
"Yes," Dr. Green replies.
"You've dedicated your life's work to educating the general populous about complex scientific ideas..."
"Yes, in part..."
"Have you ever considered trying to do something useful? Perhaps, reading to the elderly?"
"Excuse me?"
"But not your books," replies Sheldon. "Something they might enjoy."

[Blank stare] Dr. Greene.
"I kid, of course, big fan," Sheldon smiles and sits back down before exchanging a meaningful glance with Amy Farrah Fowler.

The rest of the episode continues where Sheldon and Amy leave off with respect to their discussion on gossip whereby they secretly experiment on the gang by spreading rumors, meanwhile Priya realizes that her brother's interest in the clarinet was long-since misinterpreted and Howard and Bernadette's relationship reaches an important milestone.

The set-up of the episode rests in the existence of gossip as a uniquely human phenomenon. Sheldon and Amy Farrah Fowler's conversations often follow the pattern of approximately two thirds of conversation time being devoted to social topics (i.e., the gang), most of which can be given the label gossip.

This episode explores the origins of gossip as a mechanism for bonding social groups, tracing these origins back to Amy Farrah Fowler and Sheldon's "goofing-off" (e.g., social grooming among primates). It then follows the gang as Sheldon and Amy Farrah Fowler systematically explore why social gossip in this sense should form so important a component of human interaction. Additional gossip is presented - Amy Farrah Fowler and Sheldon's change of relationship status - as evidence to suggest that, aside from servicing social networks, a key function may be related explicitly to Sheldon and Amy Farrah Fowler's "goofing off at the gang's expense" (i.e., free riders, those who take the benefits of sociality without paying the costs).

Finally, the episode reviews briefly the role of social cognition in faciliating conversations of this kind in that I suppose that you believe that I'm getting orthotics. Also, I'm carrying Sheldon's baby. Mum's the word." 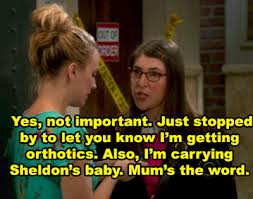 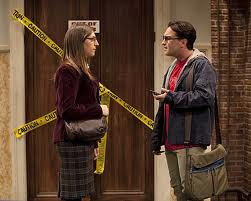 "Wow, is there anything on there about orthotics?"