Pinterest is an virtual pinboard where you can organize, post, and share images of the "things you love."  in addition to pinning the "beautiful things you find on the web," you can browse pinboards created by other people.
Request an invite: Traditionally, formal invitations are engraved on white or cream cards - either plain or bordered by plate-mark (a raised border in the paper). At one time engraving was the only printing option available for formal invitations. That is no longer the case.
Digital invitations do not require printing to reach a broader audience. Nevertheless, for any large social gathering, a degree of etiquette should be followed.
Rather than the commanding "sign up"... Pinterest values the traditional courtesy invitation, which is one of the many reasons it appeals to women.
Who's on Pinterest? 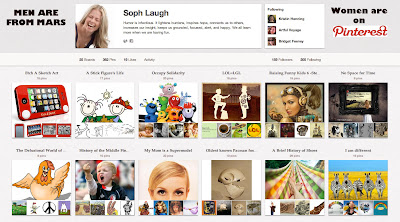 Pin Etiquette is based on the collective input from people using Pinterest. The suggestions, according to Pinterest, are to "help keep our community positive and to ensure that every pin is useful to other people." This code of behavior allows users to wend their way to a mature social life with many fewer faux pas.  While Pinterest is far from being a finger bowl requiring proper management, it is still a community whereby behavior is based on consideration and thoughtfulness. 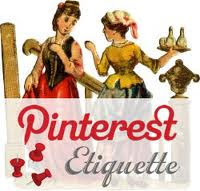 During the rein of Louis XIV, the gardens of Versailles were being designed and planeted. The King's gardner, incensed that courtiers would not keep off the grass, first put up warning signs or "tickets" - etiquettes - directing those strolling on the grounds to the path along which they should walk. When they ignored the etiquettes, he complained to the King. King Louis promptly issued an edict that commanded everyone to "keep within the etiquettes." 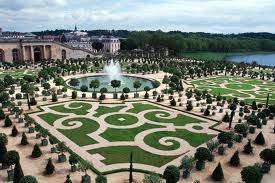 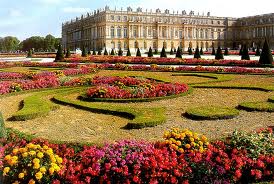 Through time, the term became one which legislated all the rules for correct deportment in court circles, and eventually it became the singular word that carries with it the instant definition of courteous, thoughtful behavior, impeccable manners, dignity and civility. 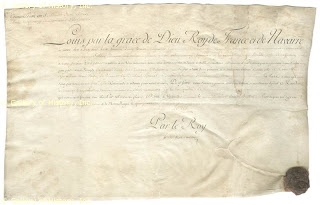 While we have since seen years of radical social change, niceties, rather than being a rigid set of rules, is, rather, a code of behavior that is based on consideration, kindness, and unselfishness - something that should not, and hopefully will not, ever change. 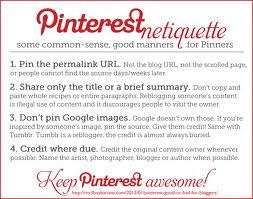 We are embracing a new century of online etiquette known as the practice of "netiquette" - social online etiquette that has evolved from rudimentary electronic communication to the sophisticated level of exchange it has evolved into today.
With new ventures, more relaxed customs, and with instant communication must come new ways of doing things. Sometimes these new ways include a fresh look at old manners, and the development of new manners that reflect the phenomenal changes in our culture. 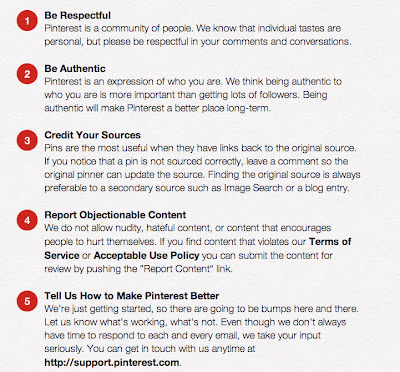 Pinterest Etiquette
Pinterest is a combination of common sense, generosity of spirit, and some specific know-how that helps us see things thoughtfully and with care for one another. Ultimately, Pinterest is the new guiding online code that enables us to practice these manners, to celebrate our traditions, ceremonies, and interests, and to be flexible enough to value and hold in esteem the rights, traditions and beliefs of others at the same time.
These elements, honored by Pinterest, embrace all that encompasses our lives today, from blended families, cyberspace courtesies, multicultural customs, global workplaces, and world religions to communal living spaces. A global community requires that we do things with consideration, gracefully and well. Many of these things are familiar because what has not changed is our appreciation of the thoughtful, unselfish behavior that enables humankind to persevere, with humor, love and grace.
Our mothers and grandmothers have been advocating these messages for 75 years collectively. It is my privilege to contribute to the work of the Pinterest Team and the steadily growing Pinterest Community. 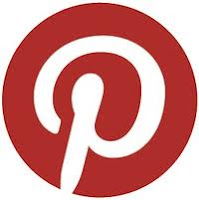 Happy Pinning!
Posted by Soph Laugh at 6:53 AM

Very pinteresting! I still don't get the pin thing