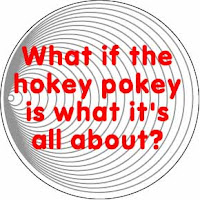 When priests celebrated Mass facing the altar, the congregation mimicked their gestures and words (as they misheard them) behind their backs. Thus, the words, hokey pokey, are actually a corruption of the Latin phrase: Hoc est enim corpus meum (This is my body).
In the early 17th century, it was believed that hokey pokey was related to the old conjuror's phrase, hocus pocus...

Supposedly, Larry Laprise (a.k.a. The Hokey Pokey Man) came across a dance in Britian called "The Cokey Cokey" and took the idea back to Idaho where his group, the Rain Trio, recorded the song as "The Hokey Pokey" in 1949, and the fav'ed dance floor song became a hit! 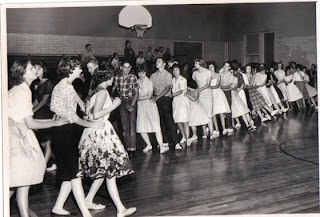 Whatever the origin, hokey pokey became associated with "nonsense" and the phrase attached itself to early ice cream street vendors who sold it as "Hokey-pokey penny a lump."  Ice cream with toffee in it is still called Hokey-pokey in New Zealand and Australia.
Nonsense found a home in humor. One of my favorite nonsensical comedic acts comes from Monty Python's Flying Circus. In The Argument Sketch featuring Michael Palin and John Cleese, Palin pays the receptionist (Davies) to have a five-minute argument. Try playing this clip the next time you argue with someone, I guarantee it will be difficult to hold onto that anger or frustration. That's one nice thing about humor, it's impossible to be angry when your mind recognizes something as funny!
Nonsense is a key element of what is called a joking relationship, which is a relationship involving a combination of friendliness and antagonism between individuals or groups in certain social situations. In these relationships, one individual or group is allowed to mock or ridicule the other without them taking offense to it.
If you're looking for joke material to take your relationships to the next (joking) level, then try The Book of Classic Insults by Tom Steele. The last family reunion I attended was my all-time favorite! Cousin's whom I had lost touch with, quickly joined in the "insult" game and before I knew it, I had learned a whole lot about "the good old days" and what my parents did when they were kids... TMI!
Here's a few of my favorite insults from that evening...
Uncle Ralph: "Santa Claus has the right idea: Visit people once a year."
Aunt Janet: "I enjoyed talking to you. My mind needed a rest."
Uncle Harlon: "A good listener is usually thinking about something else."

While not a national holiday, April Fool's Day is a classic example of a widely celebrated day whereby all kinds of jokes and pranks are considered acceptable. It's a day that recognizes the importance of good-humor. But it's not just on April 1st or in a blog dedicated to humor when you can find nonsense. Take a look around, there's some pretty funny statues out there just waiting to be photographed! 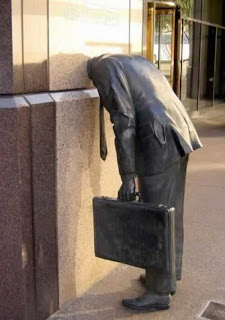 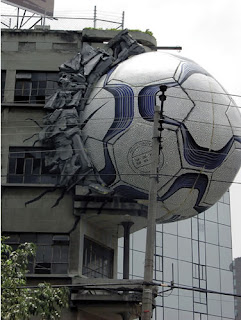 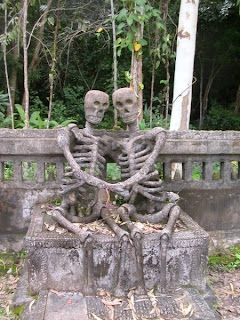 When you want to end (or win) an argument, rather than employing the one-upmanship tactic, give The Hokey Pokey Argument a try...
Turning your conflicts into a contest to see who can come up with the wittiest arguments is a game that softens hurt feelings while sharing some good laughs!
Posted by Soph Laugh at 5:39 PM