Inflexibility is The Hallmark of The Tiny Mind

In the movie Defending Your Life with Albert Brooks, Rip Torn, and Meryl Streep, Rip Torn serves as Albert's "lawyer" in the afterlife. During their interview, Albert learns that he's lived before, that he only uses 3% of his brain, and that his life, like the lives of so many he knows, has mostly been dedicated to dealing with fear.

"What are little brains?" asks Albert.

"Oh, that's just something we call you folks behind your back." 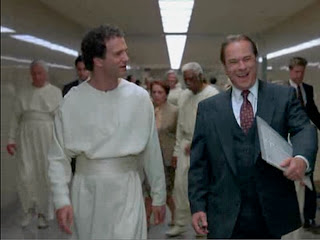 I have probably watched this movie over 100 times and still can't wait to get over to the past-life pavilion to check out who I might have been in prior incarnations.

As luck would have it, I'm not alone in poking fun at little brains. Please don't get me wrong, I'm not laughing out of spite or meanness, but rather, in the recognition that I'm actually laughing at myself mirrored in the dummy who slips on the banana peel, after all, it could happen to anyone!

'We are all born ignorant, but one must work hard to remain stupid.'

-Benjamin Franklin
Posted by Soph Laugh at 7:38 AM