On the Notion of Heaven 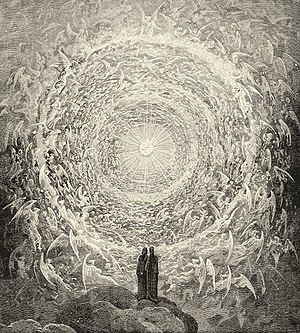 The Empyrean, from the Medieval Latin empyreus, an adaptation of the Ancient Greek empyrus "in or on the fire (pyr). Empyrean Heaven is the place in the highest heaven, which in ancient cosmologies was supposed to be occupied by the element of fire (or aether in Aristotle's natural philosophy).

The Empyrean was thus used as a name for the firmament, and in Christian literature, notably the Divine Comedy, for the dwelling-place of God, the blessed, celestial beings so divine they are made of pure light, and the source of light and creation. 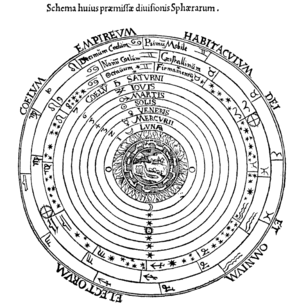 The celestial spheres, or celestial orbs, were the fundamental entities of the cosmological models developed by Plato, Eudoxus, Aristotle, Ptolemy, Copernicus and others. Less concerned with mathematical calculations than with the nature of the celestial spheres, their relation to revealed accounts of created nature, and the causes of their motion (and their existence), I think back to the date among Islamic scholars in the twelfth century (Fakhar al-Din al-Razi) about whether the celestial spheres are real, concrete physical bodies or "merely the abstract circles in the heavens traced out... by the various stars and planets."

Tycho Brahe's investigations of a series of comets from 1577 to 1585, aided by Rothmann's discussion of the comet of 1585 and Michael Maestlin's tabulated distances of the comet of 1577, which passed through the planetary orbs, led Tycho to conclude that "the structure of the heavens was very fluid and simple."

Filling in the consequent gaps between planetary spheres implied by the Copernican system, Kepler's Platonic cosmology filled the large gaps with the five Platonic polyhedra, which accounted for the spheres' measured astronomical distance. In his mature celestial physics, the spheres were regarded as the purely geometrical spatial regions containing each planetary orbit rather than as the rotating physical orbs of the earlier Aristotelian celestial physics. 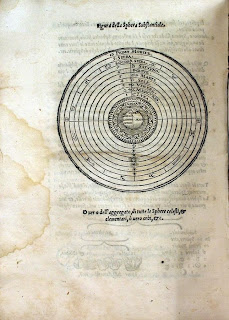 In Cicero's Dream of Scipio, the elder Scipio Africanus describes an ascent through the celestial spheres, compared to which the Earth and the Roman Empire dwindle into insignificance. Macrobius did much to spread the idea of the celestial spheres through the Early Middle Ages in his commentary on the Dream of Scipio, in which he included a discussion on the various schools of thought on the order of the spheres. 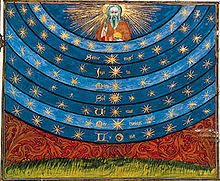 Some figures during the late medieval period noted that the celestial spheres' physical order was inverse to their order on the spiritual plane, where God was at the center and the Earth at the periphery.

This is precisely how my brain has interpreted the notion of the concept called Heaven. Some central presence from which everything is peripheral. Whereby a human being, by nature of their imagination, can travel to any point imaginable in all that is imaginable and beyond by merely projecting their thoughts to that space. A flow of energie from this perceived connection brings these two spaces closer together, in manifested form. How they form, the shapes they create are entirely manifest in the mechanics of the manifested matter they share. Whether they create a sphere or a smooth, long wave of flowing frequency, or whether they burst and form smaller particles or undulations is entirely a matter of cosmological mechanics, but the notion that such is the movements held within is enticing to the curious mind.

Copernicus' work, reforming the model of astronomy by displacing the Earth from its central place in favour of the Sun in his great work De revolutionibus orbium coelestium (On the Revolutions of the Celestial Spheres), Copernicus does not treat the nature of the spheres in detail, his few allusions indicate he accepted non-solid celestial spheres.

Undecided as to whether they are abstract or solid spheres "on which the stars turn... " (Setia), Al-Razi said: "In truth, there is no way to ascertain the characteristics of the heavens except by authority [of divine revelation or prophetic traditions]."

No intellectual commitment can be made as to the nature of the spheres with the exception of the description and explanation of what has been said heretofore. Thus, they could be black holes, as depicted in Interstellar:

They could be felt but unseen forces of nature, such as love or curiosity, happiness or joy. Whatever they are:

Then was not non-existent nor existent:
there was no realm of air, no sky beyond it.
What covered in, and where?
and what gave shelter?
Was water there, unfathomed depth of water?
Who verily knows and who can here declare it,
whence it was born and whence comes this creation?
The Gods are later than this world's production.
Who knows then whence it first came into being?
He, the first origin of this creation,
whether he formed it all or did not form it,
Whose eye controls this world in the highest heaven,
he verily knows it, or perhaps he knows not.