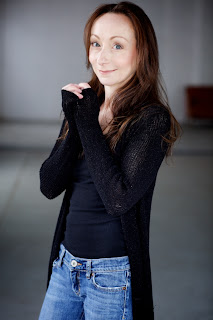 Rachel Astarte Piccione
Rachel Astarte Piccione's novel, The Bride of Manhattan, celebrates a woman who learns to live on her own terms. Barry H. Leeds, Ph.D., describes her book as "witty and humorous, wise and perceptive by turns, sometimes all simultaneously."
Rachel produces and hosts a comedy called Nyack Comedy, a show on every second Saturday night from 7-9pm at Olive's Restaurant/Bary in Nyack, NY (118 Main Street). 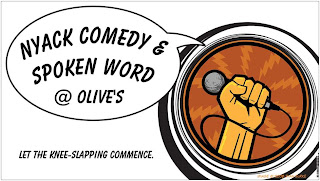 Nyack Comedy
MY INTERVIEW WITH RACHEL
Q1. How serious should we take comedy and joking?
Rachel:  It's "seriously," (!) and very. We can learn from laughter and joking. It's a natural part of who we are. Even animals goof around with each other! Comedy is part of our beings.


Q2. Who are we laughing at and why?
Rachel:  This depends on the situation. To take one example: Someone falling down (but not getting seriously injured) is timelessly funny. We laugh at others' minor misfortunes because we experience them ourselves. In a way, it's an affirmation that we're all in this whole life thing together.


Q3.  Can comedy cross the line?
Rachel:  Yes, but then it's not comedy. It's something else. Cruelty, maybe. Comedians are holy people. Shamans. We cannot abuse the gift we have by using it to harm others. That's a no-no.


(Note from Sophy: I agree with Rachel here. If comedy's cruel, it isn't comedy.)
Q4.  Is comedy on the cutting edge of social change?


Rachel:  Absolutely. Since ancient times, kings and emperors looked to their "fools" and jesters to comment on not only what was going on in the kingdom/empire, but also on directing that humor to point out their own faults as leaders! Today, political comics can create massive social movements, like the march on Washington organized by Comedy Central's Jon Stewart and Stephen Colbert.
Q5.  What heights of progressive thinking can comedy reach?
Rachel:  We can look at Lenny Bruce, Robin Williams, Richard Pryor, Lord Buckley, George Carlin, and dozens more to see where it has already gone. There's no limit!
Q6. Can humor heal?
Rachel:  Yes. This is a scientific fact. Laughter has been proven to reduce stress, fear, and boost the immune system. Not to mention, what a great workout a good belly laugh is...
Q7.  What kind of humor do YOU consider funny?
Rachel:  I love smart comedy that touches deep parts of our psyche and plays around in there. Robin Williams is my hero. He manages to go deep and stay, in his own words, "full-goose bozo."
Q8.  Why did you go into comedy/humor? What do you love about your work?
Rachel:  I literally fell into comedy when I was a little girl. My mother was a teacher and brought home from the school library film reels of great comedians. The story goes that during a film where Fatty Arbuckle tries to fry a live fish that keeps flopping out of the pan, I laughed so hard that I fell out of my little chair and onto the floor. I was pretty much over after that. On my twelfth birthday, I got a copy of Robin William's, Reality: What a Concept" album and it changed my life. I began to realize that comedy is holy. We comedians are spreading the good word!
That's why I love producing and hosting Nyack Comedy shows. There was no comedy here in Nyack, and now, every second Saturday of the month, comics get to share their act with new audiences. I'm honored to give them a place to practice their craft and touch other human beings with humor.
Thank you Rachel!
For more information on Rachel Astarte Piccione please visit her website at: Rachel Astarte Piccione . If you're interested in appearing at the Nyack Comedy Club, visit their website at Nyack Comedy
If you're interested in reading Rachel's book, The Bride of Manhattan, please visit your local retailer or click here.

The Bride of Manhattan (Amazon)