A Parody of Galactic Proportions 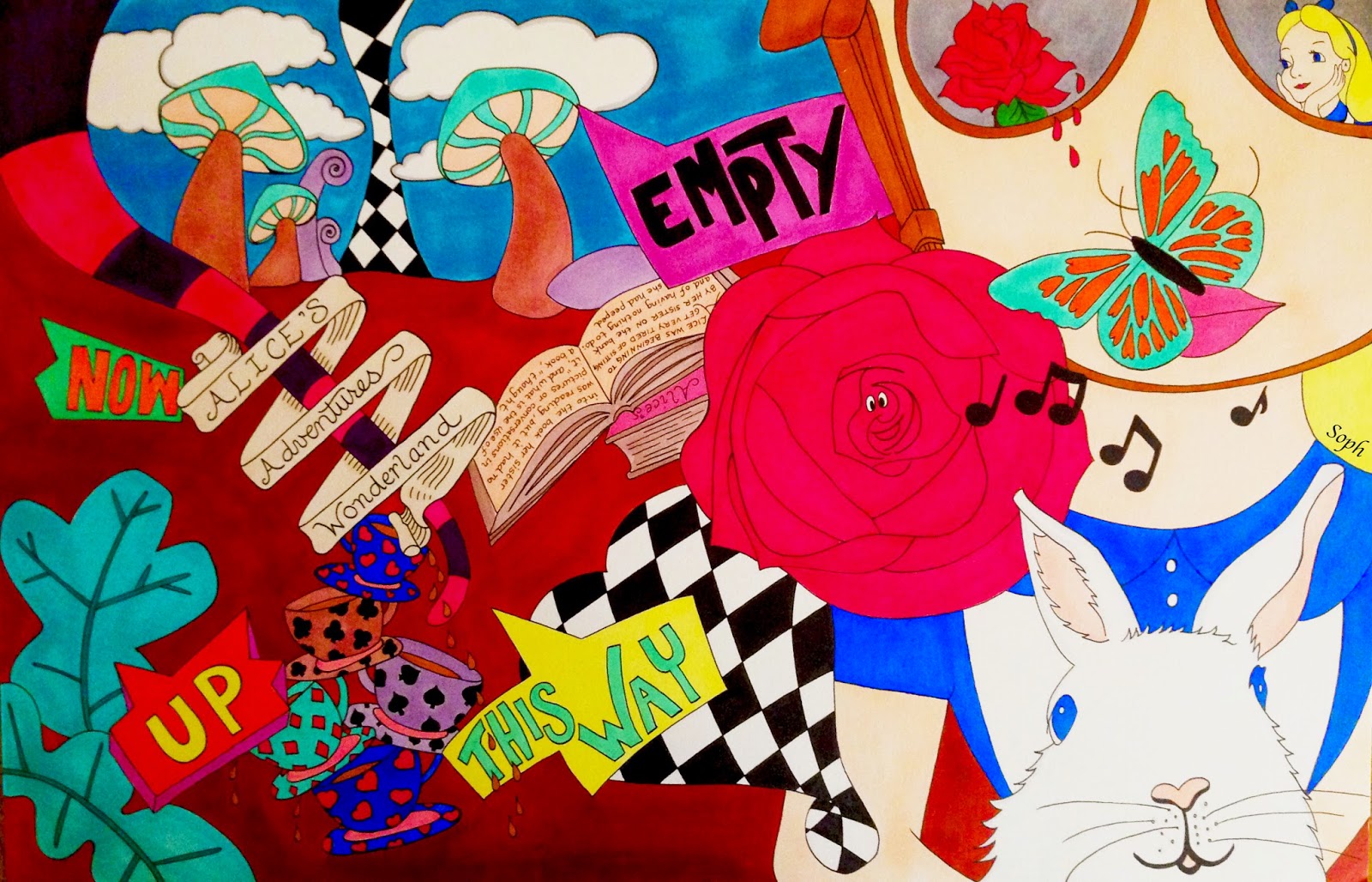 So she was considering, in her own mind (as well as she could, for her tea had grown cold and she felt entirely too lazy to get up and pour herself a fresh cup), whether the pleasure of drawing another Alice in Wonderland picture would be worth the trouble of getting up and pulling out all the art materials, when suddenly a White Butterfly with purple eyes flew close by her.

There was nothing so very remarkable in that; nor did Sophy think it so very much out of the way to hear the Butterfly say to itself, "Oh dear! Oh dear! I shall be ate!" (when she thought it over afterwards, it occurred to her that Walowitz claimed to have eaten a butterfly in 'The Werewolf Transformation' episode of the Big Bang and that she watched this episode for the um'teenth time last night and that she probably still had this fresh in her mind, but at the time a talking butterfly seemed quite natural); but when the Butterfly actually took a key to a spaceship out from underneath its wing, and looked at it, and then hurried on, Sophy started to her feet, for it flashed across her mind that she had never before seen a butterfly with a key, or a key to a spaceship, and burning with curiosity, she got up, left her tea, and was just in time to see it hop into a large spaceship.

In another moment inside went Sophy after it, never once considering how in the world she was to get out again, or whether or not she needed a spacesuit to go to space.

The spaceship went straight up for some way, then dipped suddenly sideways, so suddenly that Sophy had not a moment to think about asking to return to Earth before she found herself hurling through deep space.

Either space was very deep, or the spaceship traveled very slowly, for she had plenty of time to think as she went up and to look out the little window, and to wonder what was going to happen next. First, she tried to look up and make out what she was coming to, but it was too dark to see anything; then she looked at the sides of the spaceship, and noticed that they were filled with buttons and dials: here and there she saw monitors and beeping lights. She turned a dial as time flew by: it was labelled "SURPRISE" but to her great disappointment it was empty: she did not like to turn the dial back, for fear of stopping the spaceship mid-flight, so managed to gingerly remove her hand without moving it another centimeter.

"Well!" thought Sophy to herself, "after such a flight as this, I shall think nothing of flying back and forth to Paris! How brave they'll all think me at home! Why, I wouldn't say anything about it, even if I had to fly to India!" (Which was very likely true.)

Up, up, up. Would the flight never come to an end? "I wonder how many kilometers I've flown by this time?" she asked aloud. "I must be getting somewhere near the centre of our galaxy. Let me see: that would be the rotational center of the Milky Way, located a distance of -- (for, you see, Sophy had learnt several things of this sort in her research, and though this was not a very good opportunity for showing off her knowledge, as there was no one to listen to her, still it was good practice to say it over) "--yes, that's about the right distance - but then I wonder what constellations appear brightest?" (Sophy had no idea which constellations - Sagittarius, Ophiuchus, or Scorpius - would appear brightest, but thought they were nice grand words to say.)

Presently she began again. "I wonder if I shall fall right through the Galactic Center of the Milky Way! How funny it'll seem to come out among the people that because of interstellar dust along the light of sight, wear goggles all the time, just to see visible, ultraviolet or soft X-ray wavelengths, I think -- (she was rather glad there was no one listening, this time, as it didn't sound at all the right word) "--but I shall have to ask them what the name of the planet is, you know. Please, Ma'am, is this the gobular cluster? Or a Supermassive Black Hole? (and she tried to curtsey as she spoke - fancy curtseying as you're hurling through space at dizzing speeds! Do you think you could manage it?) "And what an ignorant little human she'll think me for asking! No, it'll never do to ask: perhaps I shall see it written up somewhere."

Up, up, up (or down, or sideways, or anyways, because which way is up in Space?). There was nothing else to do, so Sophy soon began talking again. "Fia'll miss me very much to-night, I should think!" (Fia was the dog.) "I hope they'll remember her treats at treat-time. Fia, my dear! I wish you were up here with me! There are no cats in the air, I'm afraid, but you might catch a star, and that's very much like a cat, you know. But do dogs chase stars, I wonder?" And here Sophy began to get rather sleepy, and went on saying to herself, in a dreamy sort of way, "Do dogs chase stars? Do dogs chase stars?" and sometimes, "Do stars chase dogs?" for, you see, as she couldn't answer either question, it didn't much matter which way she put it. She felt that she was dozing off, and had just begun to dream that she was rollerblading down the bike trail with Fia, and was saying to her, very earnestly, "Now, Fia, tell me the truth: did you ever chase a star?" when suddenly, thump! thump! down the spaceship came upon a heap of rocks and dry land, and the ascent was over.

[to be continued IFF by request]