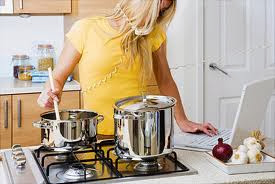 When asked how I get so many things done in the course of one day I am in the habit of saying that I "multitask". I then give credit to my extra chromosome XX. Neuroscientists have established that we do not in fact multitask, but rather process one thought at a time.


Multitasking is an attempt to engage in more than one goal at the same time. When two tasks demand competing attention, there is generally a switching that occurs between the neural processes involved, rather than concurrent processing as may be expected with true multitasking. Of note, recent research suggests that it may be possible for the brain to split two demanding tasks.

The prefrontal cortex has been frequently implicated as a brain region that mediates multitasking and the switching processes. Multitasking is commonly shown to impair cognitive performance, as each switch results in a reduction in performance compared to doing one task at a time. However, there is growing evidence that the ability to multitask can be trained with repetitive and adaptive practice. Multitasking abilities have been observed to decline as we age.

Since I had long-since been told and thus considered myself a multitasker, I decided to explore this information by monitoring my own flow of thoughts from one subject to the next during the course of my day. I noted that while the transitions or switches in thought were indeed quick, they were not simultaneous.

As I went through my day cycling through multiple projects, thoughts and ideas, one continuously following the other, until late afternoon when there was a drastic drop in the number of concepts that I processed, allowing me to linger longer with the ones from which I derive more enjoyment; I realized that - at least for me - this study was consistent with how my mind processes information.

I also noticed how difficult it was to "pick up steam" on something important after having distracted myself with Twitter or Facebook. However, other times when my attention span was waning, instead of taking a physical break, I checked my FB page, Tweeted or posted something, and then feeling a bit recharged, like I had taken a break, resumed to my project with renewed enthusiasm, which allowed me to "dig in" and focus again.

Although it is good to take a physical break and walk away from your computer on a regular basis to engage yourself in a healthy state of stasis for balance, returning from physical rest periods delays my reengagement in a project. It is as if the physical energy required to move my body ejects my mind from what I'm doing more than "switching gears" (checking FB or Twitter or LinkedIn or whatever) does.

On highly creative projects I do not want to physically move away unless by necessity I absolutely must. However on projects that require detailed, systematic thinking (such as research) or formulating new ideas, I have found it helpful to get up and move around to get the ideas "flowing" so that when I return to my project I have renewed enthusiasm and physical stamina to sit for hours at a time to read and think or write and focus on recalling information in a way that is consistent with a theory or sentiment I wish to explore.

Even though I am reluctant to stop using the term "multitasking" because so many relate to the concept, I suppose I'll now have to add YET ANOTHER verbose disclaimer of why I no longer use the term whenever the opportunity to use the term arises. 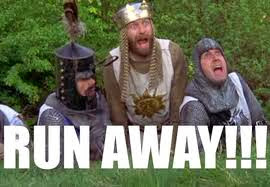 * Adam Gazzaley, M.D., PhD, is the director of the Neuroscience Imaging Center at the University of California, San Francisco, as well as an associate professor of neurology, physiology, and psychiatry.