This article is dedicated to all you Night Owls out there: 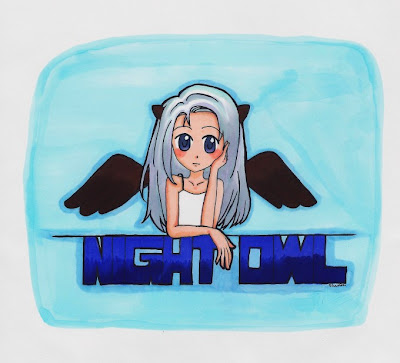 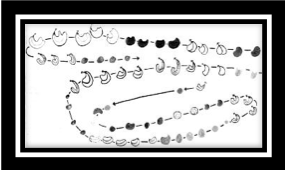 Chauvet cave
This sketch of the markings found on a Cro-Magnon bone tool, c. 28,000 BCE, may indicate one of the earliest forms of notation. The markings are suggestive of the phases of the moon, and correspond with lunar phase data of that time
(Marshack 1993, p. 14).

Approximately 4.4 billion years ago the moon turned one side of itself away from the Earth and never looked back. Despite the moon's apparent disinterest in humanity, it has captured the imagination of artists since prehistoric times.

The moon continues to captivate the interest of scientists and artists, alike. With NASA pressing forward on assessing the value of a "human-tended waypoint" near the far side of the moon - known as the Earth-moon liberation point 2 EML-2 - no doubt we'll see a surge in "moon-oriented comics" and artworks coming up for sale at auction. 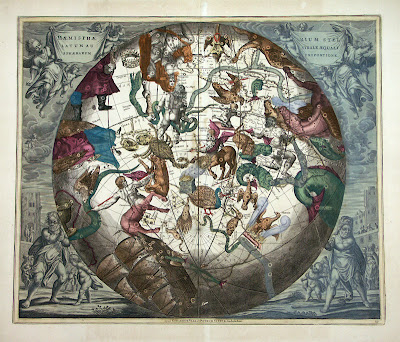 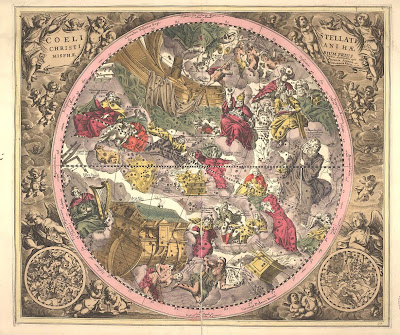 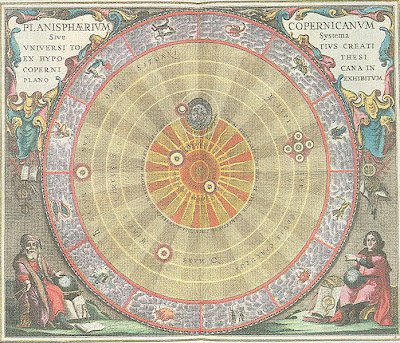 The solar system according to Copernicus was published in Amsterdam by the 17th century Dutch cartographer, Johannes Janssonius, who owned a bookstore in Frankfurt am Main, as well as bookstores in Danzig, Stockholm, Copenhagen, Berlin, Königsberg, Geneva and Lyon.

Moving ahead a few hundred years...

Gustave Doré (1832 - 1883) contributed to the visual representation of the "mysterious", much as Poe was able to do in literature. J.J. Grandville (1803 - 1847), in particular, helped to provide a firm basis for absurdity in comics as well as modern art through the surreal juxtaposition of ordinary objects and settings. His depictions of Parisian bridges connecting planets in space and animal figures going about ordinary urban tasks paved the way for Herriman's animal allegories, as well as Spiegelman's figuration of Jews as mice and Nazis as cats in Maus, his graphic novel about his father's experience during the Holocaust. Doré's illustrations, London: A Pilgrimage, were serialized in Harper's Weekly in 1872, which made them immediately available to American illustrators eager to find fresh pictorial sources. 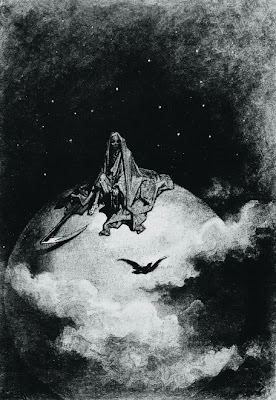 The Brooklyn Museum has one of my favorite Honoré Daumier comics depicting the moon. 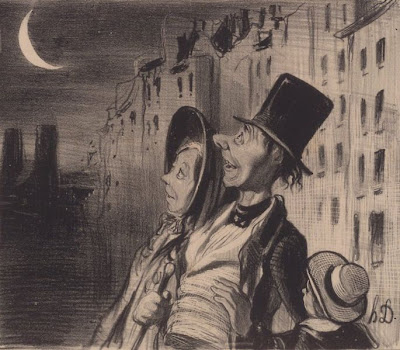 Fortunately, for those seeking to light their way through the darkness of night, a particularly nice piece by Daumier is up for auction, which depicts some Chinese warriors out on patrol in the night, carrying lanterns.

This series consists of 27 prints which were published in the CHARIVARI between December 1858 and April 1860. A drawn double fram embraces each print. The numbers appear as follows: 1 to 7 are being repeated, while 11, 16, 20, and 22 are missing.

The prints DR 3096 to DR 3124 deal with the intervention of England and France in China. After the assassination of several Christian missionaries in China, Canton was occupied by European troops in 1857. The treaty of Tien-Tsin accorded to Western states to send ambassadors to the court of the Chinese emperor and to open the harbors to European products. Since China didn't honor the treaty, the occupation of Beijing followed and in 1860 a new treaty was drawn.

Daumier was quite unique in expressing common day behavior in an exotic surrounding, while still making the viewer understand the hidden message without reading the caption. He succeeded in projecting typically French activities of daily life into an exotic setting, which would eventually distort the obvious while leaving the provocative message intact. He chose China as a setting for his lithographs since especially during the period of the early 1840s Chinese curious as well as chinoiseries had become fashionable.

The dresses shown in the "Voyage en Chine" series have been "adjusted" to what a bourgeoise Parisian would expect a Chinese to look like, sporting Chinese embroidering, ankle length wide trousers and flat slippers with upturned toes. The ladies' hair was also worn the Chinese way, while some of the men wore the long, "typically Chinese" braid." 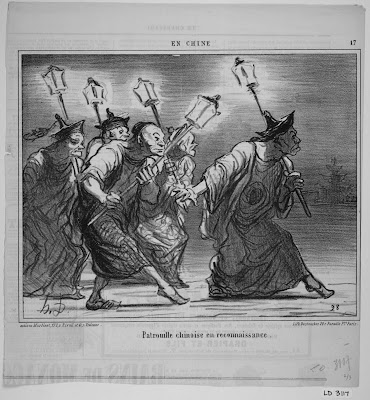