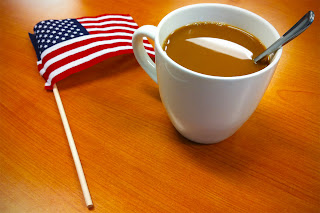 It's eerily quiet this morning. 5am is my favorite time of day. It's my "sacred hours," when I go into my library to read, write, and post my blog. My neighbor religiously walks by every day at 6:15 a.m. sharp, only she didn't pass by this morning. My other neighbors walk their three tall, thin, elegant Saluki's (dogs). They didn't pass by this morning either. Even little Miss Fia didn't want to go outside with her customary gusto. It seems as if the solemness in the air is palpable enough to rattle the dogs in the neighborhood.
The media is filled with heroic tales and gruesome images of that day that lives on in infamy. Some websites try to make light of the day with positive, uplifting messages and guest speakers, while artists share their creative expressions of the moment, and singers melt our hearts to tears with haunting music that easily touches us because the events of 9/11 touched this nation like no other event in our common history.
I'm reminded of my grandmother who always reacted so solemnly early December, forever reminding me that it was the anniversary of the attack on Pearl Harbor. While I've seen the movies, watched historical footage, and even participated professionally in the design efforts for the memorial site, I can't say that I felt the same profoundness I feel when I see past images of the Twin Towers.
It's the same disconnect with my kids who are too young to remember that day we all sat in astonishment watching the events unfold before our very eyes. While few in this nation were there in New York, we still sat glued to our television sets in utter disbelief and despair as we helplessly watched our fellow American's scramble to make sense of those events and save one another.
Naturally, we have talked about these events ever since. Teachers have talked to children about it for years, as if it were common knowledge, but really, is it? Younger children don't remember these events, and some of them weren't even born. Do we really need to frighten children about something they have absolutely no control over? I'm wondering if that's how hatred spreads from one generation to the next. Keeping the fire lit so our children and our children's children can fight our wars and battle out our prejudices. I thought we wanted a better world for them? Isn't that what they teach us in Parent school? Work hard, choose well, and make the world a better place for our kids? Is it possible to draw a line between honoring the dead and perpetuating despair?
I suppose I put myself into the shoes of the people involved. If it were me, I wouldn't want to be reminded every September 11th about what I lost. I'd want to put the pieces of my life back together and move forward. Sure, I'd be thinking of that tragic event days, even months prior, but to have it shoved in my face every year would feel like emotional abuse rather than comfort. It's a day we honor, yes, but are there other ways to honor this event without causing pain?
There's a one-liner that I came across on the Internet that said:
"One day they'll throw a war and no one will show up."


Maybe if we, as a planet, just refuse to fight old agendas... maybe if we extinguish the hatreds of prior generations... maybe if we forgive others for being human... then maybe, just maybe, no one will show up.
Wouldn't that be nice?
The Beach Boys - Wouldn't it be nice?
Posted by Soph Laugh at 7:11 AM