Supervillains of the World's Global Economy 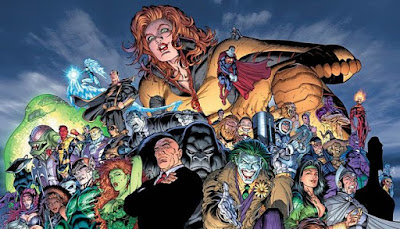 I'm going to tell you the most important secret in modern business: the supervillains have won. It didn't happen in a massive battle that no one remembers, and it's not the result of hidden schemes concocted by secret puppet masters. It happened while society was busy going to work every day, dreaming of better times to come, and checking their Facebook, Twitter, Snapchat, and Pinterest feeds on their smartphones.

The richest 1% of people own nearly half of global wealth, says report by Credit Suisse

The richest 1% of the population are getting wealthier, owning more than 48% of global wealth. This "paradox of plenty" is astonishing, and could be a trigger for a longer recession.
According to the Credit Suisse global wealth report, a person needs just $3,650 - including the value of equity in their home - to be among the wealthiest half of world citizens. More than $77,000 is required to be a member of the top 10% of global wealth holders, and $798,000 to belong to the top 1%.

The bottom half of the global population owns less than 1% of the total wealth, said the annual report, now in its seventh year.
Anti-poverty campaigners, Pope Francis, demanding just distribution of the world's bounty, and millions of people across the globe are FINALLY starting to take notice.

Let's compare the Supervillains of the World's Global Economy to the Superhero protector of Gotham City: Batman, that obsessive, manipulative, and emotionally closed off, even from his closest companions, billionaire industrialist and notorious playboy. But how different, really, is Batman from the real Supervillains of the World's Global Economy?

Econ students at Lehigh University crunched some numbers and determined thatit would cost $2.8 million to show world's criminal scum that cities, err, rather, that industry means business. After all, stealing from innocents (who then file insurance claims) costs industry money.
The students compared Wayne Enterprises' construction division to real-worldTurner Construction, which nets about $39 million. Because Wayne Enterprises is in defense, they also considered L-3 Communications' net income of $956 million in 2011. They compared the securities division with struggling Bear Stearns, which still reported an annualized net income of $684 million.

In summary, Wayne Enterprises has an approximate net income of $1.45 billion. If Wayne Enterprises trades at a similar ratio to General Electric, a public company with a significant defense sector, trading at around 16 times its earnings, then Wayne Enterprises would be the 121st largest firm in the world by market capitalization.
And Bruce? Assuming he has a 50% controlling stake in the firm, he'd be the73rd richest person in the real world, and in the fictional world, the fourth richest, putting him ahead of Iron Man.

You're thinking:
"But Bruce Wayne swore an oath to rid the city of evil. He fights crime as a vigilante. He's a Superhero not a Supervillain!"
And you'd be right. But despite his oath to put an end to the most influential and corrupt figures in Gotham City, his presence in Gotham actually inspired more criminals like Catwoman, Dr. Hugo Strange and his Monster Men, and his greatest nemesis, the Joker. Later came the Scarecrow, the Riddler, Poison Ivy, Mister Freeze, and the Penguin.

So, why compare the Superhero Batman with the Supervillains of the World's Global Economy?
ANSWER:
The inequality of wealth gives rise to crime, which ironically is precisely what motivated Batman's personal vendetta against criminals in the first place.
The richest 1% of the population refusing to equally divide the world's resources will eventually cause the entire world economy to plummet deeper into a recession from which we cannot emerge, which will only give rise to more crime.
It will take a Superman or Superwoman with a "Quest for Peace" to save the world from the Parallax-like Supervillains of the World's Global Economy intent upon rewriting the history of the universe, with them seated on the proverbial golden throne.

Disclaimer: The author has referred to the richest 1% of the economy as Supervillains based on the inequality of wealth distribution on the planet and the corresponding crime and unhappiness inequality produces.
Posted by Soph Laugh at 12:40 PM