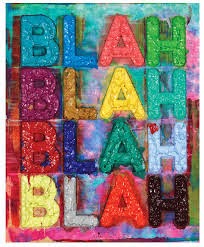 Plato and his teacher Socrates would have laughed at this art. It symbolizes the logon didonai or the human ability to "give reasons" to sway the doxa, what we call "public opinion" (which is the main target of rhetorical persuasion).

Here's the rub. The Sophists of yesterday still dwell among us. Making their way around the world, around the internet, and into our homes and minds. Evoking pathos with every word they speak, every post they share, Sophists move their audience, which is, according to Plato, a type of "rhetorical pathology" (Phaedrus, 272) intended to cause mental confusion. 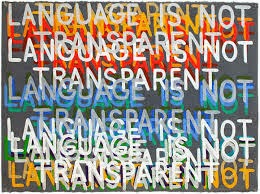 Language Is Not Transparent
Mel Bochner

Sophist-like posts, tweets, articles, and videos flood the internet. Calculated to cause people to feel sympathy and sadness, this artistic representation of human expression triggers the emotional center of the brain, evicting the soundness of judgment with it.

How is it that words can move us so? What faculty of human understanding is so powerful, yet so manipulatable, that an individual who has no true understanding of that which they say can still overwhelm us with words, causing us to abandon all sense of balance and tranquility in the process? Swept away in an emotional hijacking, the transformation from the rational to the irrational occurs in a split second, at the very sight or sound of the Sophist's persuasive sermon.

News stories, headlines, social posts, and public videos share this sermon-like vernacular. Our society is accustomed to it. The lingo of the masses has long since been a dialect intended to move, persuade, or sway an individual toward a certain belief system - even if only temporarily, because in reality, it is only a temporary moment of irrational thinking that is needed to cause a revolution. Irrationality cannot be sustained on a long-term basis without the continual bombardment of highly charged words to supercharge human emotion. 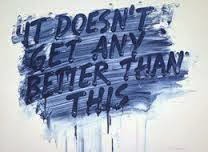 It doesn't get any better than this
Mel Bochner

It was for this reason that Plato rejected rhetoric as an appropriate form of providing education through reasoning speech. According to him, the ability to provide reasons cannot be of useful service in the formation and transformation of public opinion; such service reduces it to the mere conformation to majority opinion and renders it manipulative.

Therefore the receiver of education should first and foremost gain insight into true reasons. Such knowledge, which makes it possible to take a stand against the whole world, is accessible only to philosophy. Philosophy is therefore episteme (true, right science), which sophistic rhetoric, always aiming at doxic understanding in its common aspect, has never been able to reach. 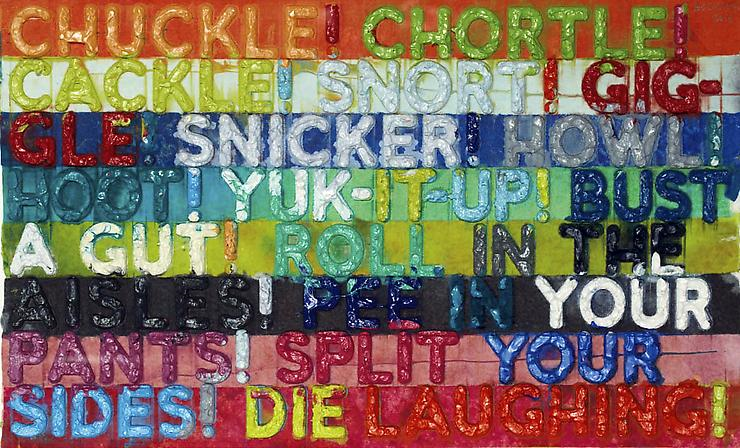 Is Philosophy the true and right science? Certainly philosophical thinking can be described as a method by which thoughts and conclusions are analyzed against that which we know, that which we do not know, and that which we can only rationalize. But who has the time?

Most individuals simply rely on their own filtering system, presuming that "right" vs "wrong" will be instantly illuminated inside their heads, giving them direct access to that which is true, correct, and obvious. "Duh," I used to say as a young teenager, which was met with an automatic rolling of the eyes by my parental units. 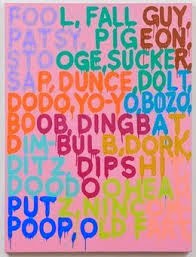 However, this blog also stirs the power of individual thought in the process. Articles herein have one thing in common despite their diverse subject matter: A lack of rhetoric. 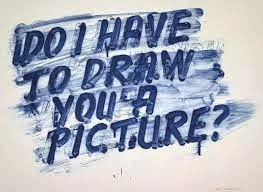 Do I have To Draw You A Picture
Mel Bochner

The words and pictures herein combine together to offer insight into true reasons. Humorously, factually, quizzically, prolonged exposure to philosophical thinking will make it possible for an individual utilizing rational judgment to take a stand against the whole world and replace it with humor, insight, and questions that make others think.

Still more: Philosophical thinking can re-educate and transform the easily-swayed mind into a community effort, a mindset capable of examining multiple scenarios without attachment to any specific agenda that has not undergone significant examination. And even after examination, a community mindset will continually revisit prior conclusions and test them against new hypotheses to ensure their continued validity or, if incongruities arise, expose their vulnerability to new scenarios.

This type of thinking system is at the heart what Socrates instilled in his follower students. For Socrates, freeing himself and his fellow citizens to think for themselves meant that there was no room for (old) poetry, since

we are ourselves authors of a tragedy... Thus you are poets, and we also are poets in the same style, rival artists and rival actors, and that the finest of all dramas, one, which indeed can be produced only by a code of true law (Laws, VII 817b). 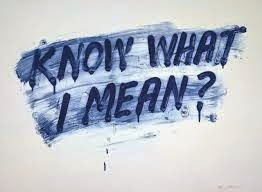 Know What I Mean?
Mel Bochner

Despite all this examining, there was still room for the gods in Socrates' heart and mind, but Plato's texts offer us insight into why. On a very personal level, Socrates wanted to dwell among the gods. He wanted to feast with the Olympic winners for the rest of his days.

On a spiritual level, the 4th century witnessed a permanent change in the attitudes of all Greeks. What resulted was a new attitude toward life and its expectations - a new world view. In the classical world of the polis, public and private lives were fused. Duty to the city-state was in itself virtuous. But in the Hellenistic world, public and private lives were made separate, and the individual's only duty was to himself.

In art, sculpture, architecture, or philosophy, we see more attention paid to individualism and introspection. Plato's Ideas and Forms - universal principles of truth - were rejected in favor of individual traits.

Socrates, the most noble Athenian, spent his entire life trying to fathom the mysteries of life: what is virtue? what is justice? what is beauty? what is the best form of government? what is the good life?

In the Apology, Socrates, 70-plus years old, knew that he could go into exile, knew that he could flee his beloved Athens, but instead chose to remain and allow those in power to put him to death. Whether he would eternally dine with the gods he could not know for certain, but he could allow himself to imagine it freely because he had spent a lifetime examining it fully.

In the end, what we ultimately choose to believe is our own.

By example of Socrates we know it is possible to die free in the knowledge that we have examined life and ourselves to the best of our abilities. What comes afterwards we cannot know, but true examination prepares one for all possibilities.

People who examine their thoughts are the ones who can enjoy rhetoric because they have the capacity to put it in its place, to understand its intended pathos, and to recognize its inherent effect upon the mind ... without buying into it. 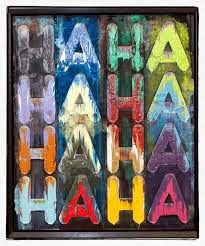