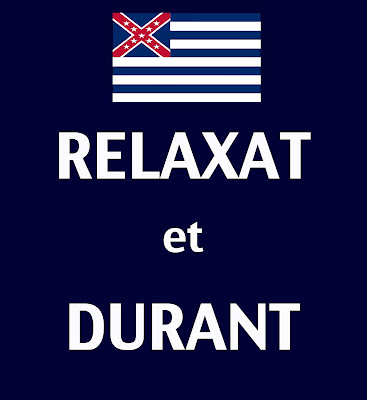 (Relax and Carry On)

The expression "Relax and Carry On" (Republic Style) has its origins in the Aeneid, a latin epic poem, written by Virgil between 29 and 19 BC, that recounts the legendary story of Aeneas, the Trojan who traveled to Italy and became the ancestor of the Romans, linking the Rome to the legends of Troy.

Aeneas is the embodiment of the Roman ideal of pietas ("piety, dutiful respect"), which is a selfless sense of duty toward one's filial, religious, and societal obligations. Glorifying traditional Roman virtues, piety was the crux of ancient Roman morality.

In Book 1 of the Aeneid, when the Trojans take possession of the sands of the Libyan coast, Aeneas with seven ships gathered from the fleet conquers the leaders, seeks the harbour, divides them among all his friends, shares out the wine that the good Acestes had stowed in jars, on the Trinacrian coast, and speaking to his men, calming their sad hearts, said:

'‘O friends (well, we were not unknown to trouble before)
O you who’ve endured worse, the god will grant an end to this too.
You’ve faced rabid Scylla, and her deep-sounding cliffs:
and you’ve experienced the Cyclopes’s rocks:
remember your courage and chase away gloomy fears:
perhaps one day you’ll even delight in remembering this.
Through all these misfortunes, these dangerous times,
we head for Latium, where the fates hold peaceful lives
for us: there Troy’s kingdom can rise again. Endure,
and preserve yourselves for happier days.’ 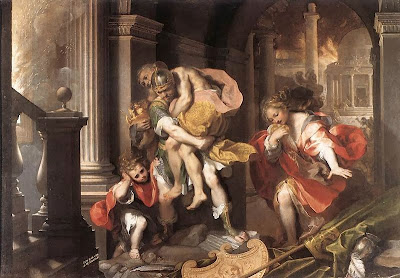