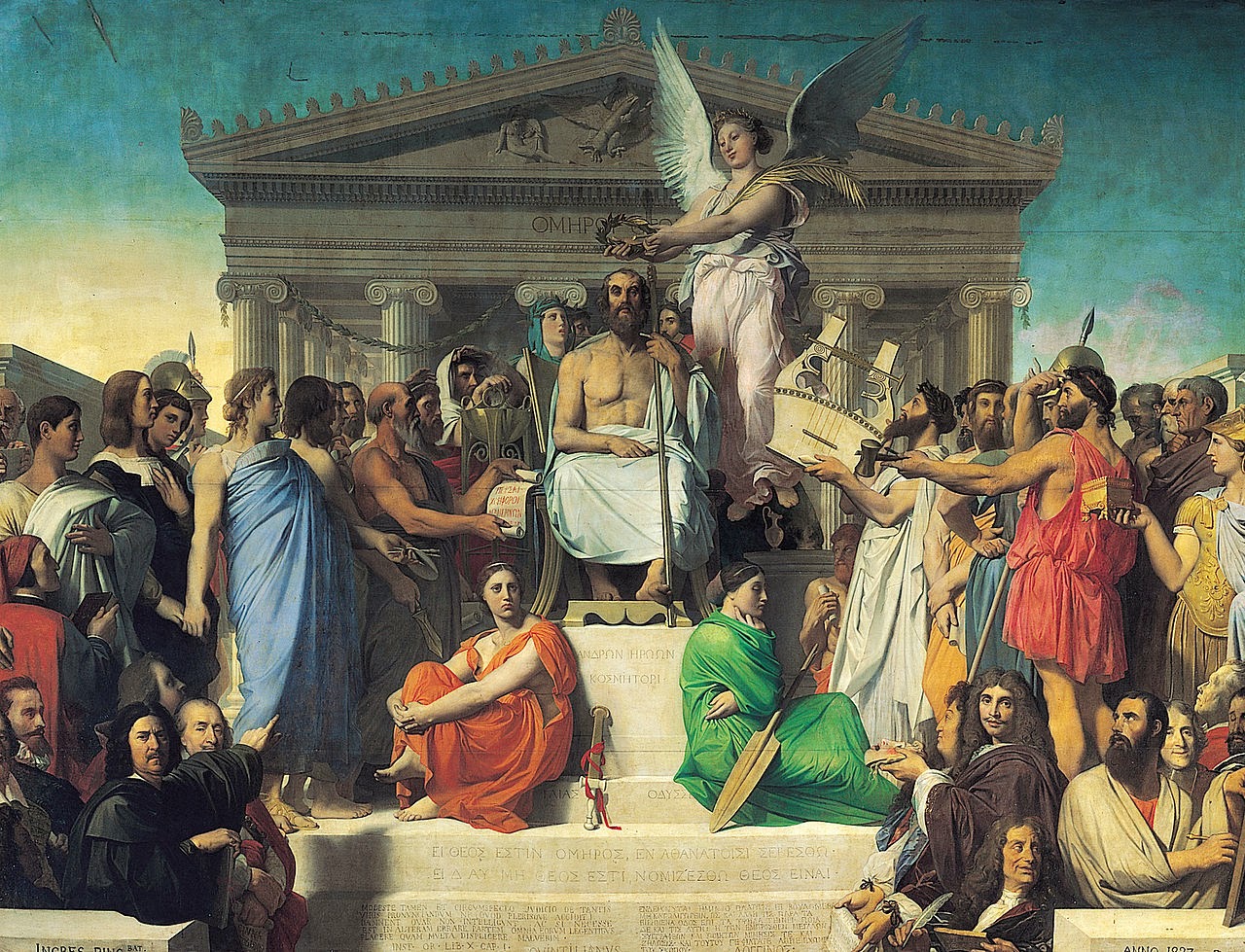 The Apotheosis of Homer (1827)
Jean-Auguste-Dominique Ingres
Louvre, Paris (INV 5417)
The symmetrical composition depicts Homer being crowned
by a winged figure personifying Victory or the Universe

He described the ocean, oxen, and sheep as being the color of wine. Now, I may not see color, but I definitely recognize contrast, and from what I can tell, sheep are lighter than the ocean. Of course water is transparent and only appears to have color (for color-sighted people) because water absorbs the red part of the light spectrum, leaving only the blue part.

Honey, he described as being green. He also described a nightingale as green. I can’t speak for the nightingale, but I’ve been told since before primary school that honey is yellow. The sky he described as bronze, and Hector’s hair as being the color of stone, which I think he meant was a cool color, such as gray.

Homeric scholar William Gladstone, who became the prime minister of England four times, counted all the colors referenced in the Illiad. According to Gladstone, there were thousands of blacks and whites, a few reds, yellows, and greens, but no blue.

Scholars jumped on Gladstone’s bandwagon and began searching for the color blue in ancient Greek writing, but there was no mention of blue in Aristotle’s works. Even the color theorist Empedocles did not mention the color blue. Ancient Greeks either didn’t have a color word for blue or they were all color blind.

A Brief Explanation of Color Blindness

People with deuteranomaly and protanomaly are collectively known as red-green color blind. They generally have difficulty distinguishing between reds, greens, browns and oranges. They commonly confuse different types of blue and purple hues.

People with reduced blue sensitivity have difficulty identifying differences between blue and yellow, violet and red and blue and green. To these people the world appears as generally red, pink, black, white, grey and turquoise.

People with dichromatic color vision have only two types of cones, which are able to perceive color, i.e., they have a total absence of function of one cone type.  Lack of ability to see color is the easiest way to describe this condition but in fact it is a specific section of the light spectrum that cannot be perceived. The sections of the light spectrum that the ‘red’ and ‘green’ cones perceive overlap and this is why red and green color vision deficiencies are known as red/green color blindness.

People with monochromatic vision can see no color at all and their world consists of different shades of grey ranging from black to white. Achromatopsia is extremely rare, occurring only 1 in 33,000 cases and its symptoms can sometimes make life challenging. Usually someone with achromatopsia will need to wear dark glasses inside in normal light conditions (or have the lighting dramatically subdued). 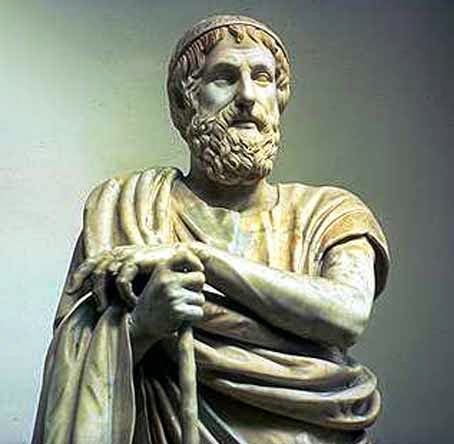 Concluding that the Greeks as an entire culture could not have all been color blind, and that the cone receptors in our eyes could not have changed that much over the course of three thousand years, scholars were forced to conclude that not seeing blue was a mental block.

Aristotle described colors as the presence and absence of light. Then, over time, red emerged, then green and yellow, and finally, blue.

Some scholars have suggested that red came first because it was the color of wine and also blood, two fluids flowing in abundant supply during the early days of civilization. Green, being the color of foliage, was useful in differentiating one (poisonous) leaf from another.

Homer was essentially writing around the time that the concept of yellow was invented. What is interesting is that not having a word for blue essentially caused him to describe color as would a tritanopiat, essentially filtering out all the blue light. Put on a pair of blue blocking sunglasses and the sea probably does look like wine, and the sky like bronze. Until our minds invent the existence of blue, one might describe the sky as white, and blue things as other colors.

Once in a Blue Moon

Language is not just a code. It gives us (even color blind people) the ability to describe a set of preexisting things. Language gives us the ability to perceive these things. Essentially as our language evolves, so too does our ability to perceive the world around us. Notably human language and perception are linked. I wonder what words we’ve yet to invent that will unlock perceptions we’ve yet to discover we have.

This post was intended to set the record straight (when it comes to color). Growing up in a world of color sighted people sometimes makes color blind people feel left out, but that does not mean that color blind people do not have an inherent understanding of color. Thanks largely in part to language even a color blind person knows that the sky is blue – even if they can’t see it.